School of the Commons of Dakar

Dakar is the capital city of Senegal and has been the focal point of an ambitious cultural policy, carried forward by President Leopold Sedar Senghor, with the emergence of several urban developments and cultural facilities between 1960 and 19980, in particular, the SICAP district. It is a central district within the city where several cultures from Senegal, West African sub-regions and Cap-Vert create a singular identity, highlighted by its diversity and its openness. Due to the influence of structural adjustment policies, a lack of public investment and impoverished inhabitants, over the years, public areas and educational, cultural and sanitary facilities within the area have deteriorated. The project is led by the organisation/non-governmental organisation under Senegalese law, Kër Thiossane.

Kër Thiossane is a cultural space for artistic and social experimentation in Senegal, a place of sharing rooted within its own territory and present on the international scene, and a hub of resources for digital creation in Africa

After the social forum in 2011, Kër Thiossane established a deposit of common goods and within the last two years, has produced feedback and content, both locally and internationally shared. It has also actively contributed to the network through the establishment and running of facilities emerging in different intercultural contexts in the North, enriching them with perspectives from the South (http://www.remixthecommons.org/).

Kër Thiossane decided to formalise the various initiatives it had started by opening a school about the concept of an everyday 'In-Common' facility. The project was launched due to serious issues regarding urban areas, including neighbourhood conflicts, public spaces that had fallen out of favour and a lack of infrastructure. This is based on the idea that creativity demonstrated by groups and individual citizens can counteract these situations and encourage citizens to reclaim and exploit their city through a creative approach, thus making it more hospitable, sociable and secure.

The city of Dakar has been formulating a cultural policy based on consultations with cultural stakeholders, centred around supporting creation and distribution, training cultural actors and private initiatives. A redevelopment programme has been initiated for the 17 socio-cultural centres through urban culture and plastic art workshops. Their three main purposes involve training, creating and promoting creativity. The training programmes aim to provide uneducated cultural actors with vocational training. A cultural initiative support fund has been put in place will subsidize projects that have already been examined by a jury of professionals from civil society. However, the provision of infrastructure has been slow to develop, and the recruitment of qualified cultural mediators is yet to enhance. Moreover, the grant funding ensuring the sustainability of the supported initiatives will not suffice. Dakar also joined the UNESCO Creative Cities Network, in order to (1) unite digital technologies and art; (2) support creators and ensure they have access to digital tools; (3) encourage the population to adopt digital technology; (4) contribute to enhance the local creative economy.

The project was launched due to serious issues regarding urban areas, including neighbourhood conflicts, public spaces that had fallen of favour, and a lack of infrastructures. It is based on the idea that groups and individual creativity can counteract these situations.

The project will draw on several of the founding principles of free culture: knowledge sharing, free access to culture and education, research, experimentation, relaying of information and respect for diversity. The ‘‘School of Commons’ enables artists to develop collaborative artistic practices by experimenting new ways of engaging with communities around the concept of living together. This laboratory of artistic experimentation both supports and links the artistic production with the strengthening of skills and cultural and political capabilities. The unique methodological expertise arising from this shall be shared. Through the promotion of free software, Do-It-Yourself/Do-It-With-Others, free licences (Creative Commons) and shared knowledge, new alternative business models will be tested on audiences (residents, craftspeople, DIY enthusiasts, computer engineers, developers and cultural actors).

G1 - "Identify the common goods to be used for citizenship construction, through culture and artistic practices".

The artistic and cultural should contribute to a better definition of common goods and enable a greater consideration of culture as vectors for citizenship.

G2 - "Democratise culture and common goods among populations of all ages and backgrounds in Senegal".

Through the artistic and cultural citizen projects, the objective will be to restore the positive image of artistic practices and urban cultures.

G3 - "Use culture to gain recognition from politicians and citizens and harness their ability to act on behalf of common goods within their local area".

Help bring together groups of citizens, institutions and elected officers by exhibiting and promoting artists as part of citizen actions.

G4 - "Provide decision-makers with culture and art as effective tools for sustainable development and the preservation of common goods".

SG1 - "Use culture as a vehicle for educating the general public on the preservation of common goods".

Through a participatory approach to art, the goal is to involve and educate the general public of the Sicap commune and Dakar in the management of common goods.

SG2 - "Promote art as a vehicle for involving inhabitants in the management of their city".

To encourage the citizens to reflect on their city and take responsibility for their local area, through the spreading and distribution of citizen cultural projects.

To support the growth of a multi-disciplinary artistic creation sector ( training, creative workshops, artist residencies), to extend its development and influence through the professionalization of actors, the production of content specific and proper communication, which will also give it international recognition.

SG4 - "Test the self-management of an 'in-common' space through culture".

To contribute to creating an 'in-common' space that encourages the combination of different practices, disciplines, actors and audiences and will test the management of an 'in-common' facility.

Allow the training of young people to become social coordinators/mediators.

Outreach, listening and educational work was carried out and the project was approved, including residents and the local contributors (institutions, mosques, associations, social centres, etc.) before the project was implemented.

The artistic ‘Jet d’Eau’ garden was built by the artist Emmanuel Louisgrand, in collaboration with local craftspeople and gardeners. The Defko Ak Niëp FabLab (Do-It-With-Others), is a space for sharing digital means, and is part of an alternative approach to free culture that prioritises the sharing and enrichment of common goods, with electronic workshops for young audiences, PC refurbishment workshops and 3D printing presentation evenings have been organised on a regular basis. In the spring of 2014, the 4th Afropixel festival schedule, called the 'Jardin de Résistance' (Garden of Resistance) was based around the ‘School of Commons’, with a rich and diversified programme (workshops, conferences, artists residencies, web radio), attracting an audience of around 3,000 people during one month.

It involves using artistic practices as a way of opening mental and sensitive spaces and establishing methods of experimentation that are based around the concept of living together.

The main challenge was avoiding letting Kër Thiossane simply stand in for other institutions, rather than remain an experimental common goods project in terms of artistic creation and sustainable development while including all local contributors. The other challenge involved losing sight of the meaning of 'common good' within urban areas in Senegal, where individualism has a greater bearing than community spirit, and where it is difficult to get people involved on a voluntary basis without offering them personal, political or religious benefits. The ‘School of Commons’ has successfully implemented the concept of sharing and hope in an abandoned public space. Local residents now start thinking of ways to enhance their surroundings. The ‘School of Commons’ has enabled residents to meet each other and discuss their local area. Artistic actions have combined urban cultures, photography, digital technology and modern art with more traditional forms of creativity, such as SIMB (false lion) ceremonies and fashion.

The project has helped Dakar city's various departments to understand the opportunities that are created by setting up cultural projects; to assess the benefits of using a common goods concept as a way of encouraging people to take responsibility for local environmental, educational and cultural issues; and to find an effective method for getting a wide audience to appreciate digital art.

The project has inspired a Dakar Ville Creative Arts Numériques (Dakar City of Creative Digital Art) approval scheme, which the city uses to join forces with initiatives that promote digital art. It has been involved in a restoration process for the municipal SICAP library.

As a result of the project, artists from Dakar (e.g. plastic arts, music, urban culture, literature) have benefited from the use of a space where they can relate to the concept of common goods. Artists have been able to discover tools and skills that may improve their crafts. School pupils, college students, sixth formers and university students have been able to express their creativity. The SICAP inhabitants have seen their neighborhood adorned with a public garden, a FabLab and a place for discussing common goods.

Economically speaking, the impacts of the project are the creation of developer, artist landscape gardener jobs in the SICAP area; the training and introduction of craftspeople on 'Makers' practices; the promotion of software and open source culture; and the development of an open source mapping software. Environmentally speaking, the project permitted the renovation of a public space as an opened space to the public, with a playground for children and a training space for jobs in the field of ecology.

Researchers, sociologists, art historians and local populations have already began to document and evaluate the project. The expertise gained will be shared at local and regional level and will be combined with the international experience of Living Labs, particularly for more contexts in southern areas; it will contribute to renewing sustainable cultural policies and will become a source of knowledge and innovation in terms of culture and common goods.

For the continuity the following to be held are:

Artistic actions have combined urban cultures, phtography, digital technology and modern art with more traditional forms of creativity, such as SIMB (false lion) ceremonies and fashion. Kër Thiossane reconsiders its use of space, sociology and history.

The city of Dakar was nominated for the second 'UCLG International Award – Mexico City – Culture 21' (January-May 2016). The awards jury produced a final report in June 2016 and asked the UCLG Committee on Culture to promote this project as a practical example of the implementation of Agenda 21 for Culture, and as a special mention of the second edition of the Award. 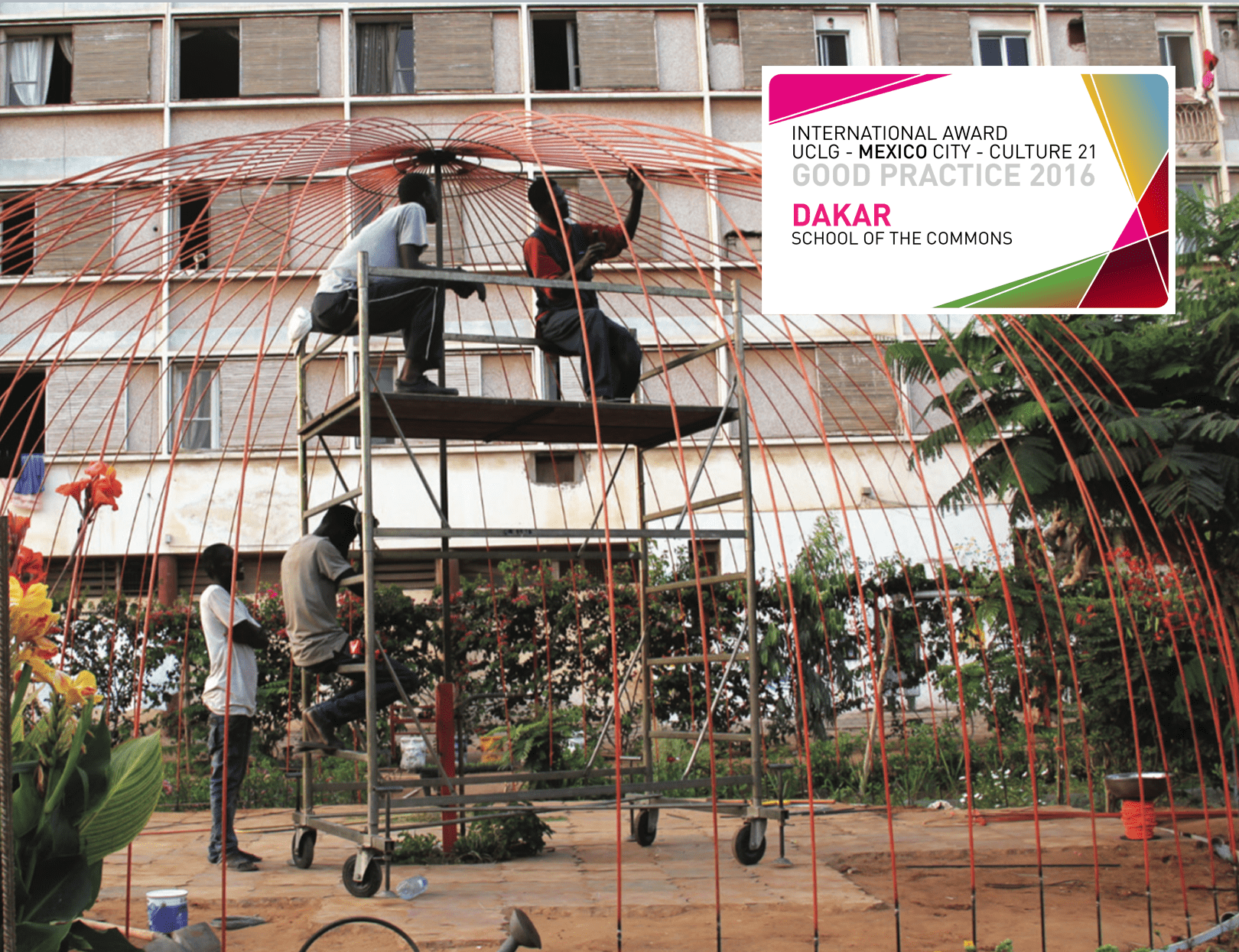