Kaunas modernist community movement: building up emotional attachment to the city and its heritages' future

Kaunas is the second largest city in Lithuania, with 400 000 inhabitants together with its District. The city is both a rich historical and modern center, concentrating business, industry, sports and cultural activities. Kaunas holds popular annual music, design, architecture, photography, modern visual art, modern dance, street art and new media festivals. Kaunas is also an academic, youthful and international town, with more than 30 000 students coming to study in one of Kaunas’ 5 universities every year.

Kaunas is the only Lithuanian city that belongs to the New Hanseatic League international city union. It is also famous for its unique New Town where numerous exhibitions of modern interwar architecture of the 1920-1940s are hosted regularly.

Nowadays, Kaunas is renewing itself in prevision of becoming the European Capital of Culture in 2022.

The slogan of the program “Kaunas the European Capital of Culture 2022” calls for a transition from a “temporary” to a “contemporary” capital, and a whole part of the program is dedicated to Kaunas modernism (“modernism for the future”), driven by the idea that the past behind us can push us forward.

In the swirl of European history, Kaunas, then capital of the country, was Lithuania’s gate to the modernising Europe. As it was entering its “golden age” (1920-1939), modernist ideas were brought to Lithuania by intellectuals studying abroad, and acquired a unique Lithuanian artistic form of interwar modernist architecture.

However, nearly a quarter-century after the restoration of Lithuania's independence, Kaunas suffered from an identity crisis, and was struggling to find a key to its future development, as memories from the interwar golden age period hardly survived through the memory of architects and other Lithuanian intellectuals. A first impulse of Kaunas cultural revival emerged with the organisation of Kaunas architecture festival in 2013, a widely acclaimed exhibition (now touring Europe) which focused on Kaunas modernist architecture.

More importantly, in 2015, Kaunas was awarded the European Heritage Label. In January 2017, Kaunas modernist architecture was included in the UNESCO World Heritage Tentative List. In 2018 celebrating 100 year of anniversary of Lithuanian independence, the exhibition ‘Architecture of Optimism: The Kaunas Phenomenon, 1918-1940' was launched. For Kaunas today, that heritage has become the foundation of the city’s identity and an expression of its genius loci. This exhibition is more than just the story of one city. It speaks to the perpetual birth and collapse of dreams, about creative endeavours and the appeal of rewarding optimism, and about the migration, locality and commonality of ideas and forms.

This program of Kaunas – European Capital of Culture 2022 ‘Modernism for the Future’ aims at enhancing collaboration of various forms between professionals, property owners, heritage experts, representatives of cultural initiatives, politicians and civil servants to establish and implement a strategy for conservation, interpretation, promotion and activation of modernism heritage.

The specific goal of the program is to instill a sense of responsibility for the surrounding environment and create an emotional connection between the heritage community and the urban cultural landscape, as well as to initiate international research efforts, in order to bring back Kaunas’ modernism on the European and global stage.

Kaunas is home to more than 6,000 buildings built during the interwar period, which have survived to this day. This amazing legacy of diverse modernistic architecture is a living testimony of the city’s period of prosperity and modernization, and reflects a whole philosophy of life, which forever changed established habits and the balance between work and leisure.

Alas, today many of these buildings are in poor condition, neglected or even empty, and Kaunas modernist architecture faces plenty of issues: higher education institutions abandon valuable modernist buildings to avoid high maintenance costs; state institutions move to new premises; residents lack the financial resources to properly maintain their property, and the municipality is unable to bear all financial costs itself, and has no intentions to invest in acquiring buildings and adapting them to the city’s cultural and social activities. The value of the historic and cultural asset is equally underestimated by residents, business sector representatives, and the political level.

The programme of Kaunas 2022 European Capital of Culture “modernism for the future” is an open space for initiatives and meetings, welcoming professionals from various fields, building owners, heritage community and representatives of cultural initiatives for discussions, idea workshops, art and culture who together create the strategy for preservation, interpretation and dissemination of modernist heritage.

Driven by the idea that Kaunas and its residents need fresh meaning and emotions associated with the local heritage, ‘Modernism for the Future’ has strived recently to create a contemporary success story built around the preservation of the city’s modernism heritage, using the past as a source of inspiration for a modern future. As a result, the number of people joining ‘the modernist network’ (e.g. https://modernizmasateiciai.lt/en/) grows steadily every year beyond the sphere of architects and architecture theoreticians, participating in various activities contributing to preservation of the interwar modernism heritage in Lithuania, strengthening its societal status, shaping the attitude towards this exceptional heritage and promoting further research and creativity. The most active partners for promoting and interpreting modern architecture in Kaunas:

To support these activities, as well as to invest in restoration of buildings, Kaunas City Municipality plans at least to maintain the current level of yearly financial allocations (30,000 EUR in 2015, 400,000 EUR in 2016, and 1 million EUR in 2017). Besides financing the program for “Kaunas the European Cultural Capital 2022” platform ‘Modernism for the Future’ and efforts related to the inclusion of Kaunas modernism in the UNESCO World Heritage list, Kaunas City Municipality also grants around 800,000 EUR per year to 7 other programs, which include supporting young artists, developing Kaunas.

Centre pedestrian zone and Old Town cultural and creative space, partly financing professional and amateur cultural projects and other initiatives by the citizens. Celebrating the Centenary of the Restoration of the Lithuanian State, this year strongly adds to awakening love of the country and respect for the living environment.

The awarding of the European Heritage Label in 2015 was a starting point that strengthened kaunasians self-confidence and encouraged municipal politicians to take further actions.

Kaunas economy has also felt the impact of the modernist movement – in 2015 Kaunas City tourism and investment agency “Kaunas IN” presented a thematic tour “Reflections of Kaunas modernistic architecture”, which was ordered 6 times in 2015, 23 times in 2016 and 60 times in 2017. Interwar modernism also interests foreign investors, keener on establishing their offices in interwar architecture buildings (e.g. “Intermedix”).

The modernist movement brings together many cultural agents that are active in Kaunas, besides the above-mentioned architects and historians. Kaunas modernism has been increasingly recognized by foreign media and influencers – it was presented in “The Guardian", Francetvinfo.fr, “LaRepubblica.it”, “Switch magazine”, etc.

The active participation of the modernist community is beneficial to the whole city – residents of Kaunas build trust in their city and start believing in its image, real estate owners increase their self-respect and discover the added value of their property, historians collect more stories from residents that are more willing to speak out, the city is filling up its collective memory storage, architects get inspiration, and the incoming tourism sector is sharing fascinating stories with foreign guests, as well as with the locals.

Every modernist community member is responsible for his or her own activities; therefore, there is no joint evaluation mechanism related to concrete results.

Key success factors for the modernist movement imply that the whole initiative:

Ensuring preservation, management and access to cultural heritage is set as priority in Kaunas City Municipality Strategic Development Plan up to 2022, and strengthening Kaunas’ image as city of modernism heritage, contemporary culture and design on international scale is a main goal of Kaunas City Cultural Strategy up to 2027. In total, 12 million EUR will be allocated to “Kaunas 2022” program from the municipal budget, plus 4 million EUR as Kaunas District Municipality’s commitment.

Kaunas was a candidate for the third "UCLG Mexico City – Culture 21 International Award" (November 2017 – May 2018). The jury for the award drew up its final report in June of 2016, and requested that the Committee on Culture promote this project as one of the good practices to be implemented through Agenda 21 for culture. 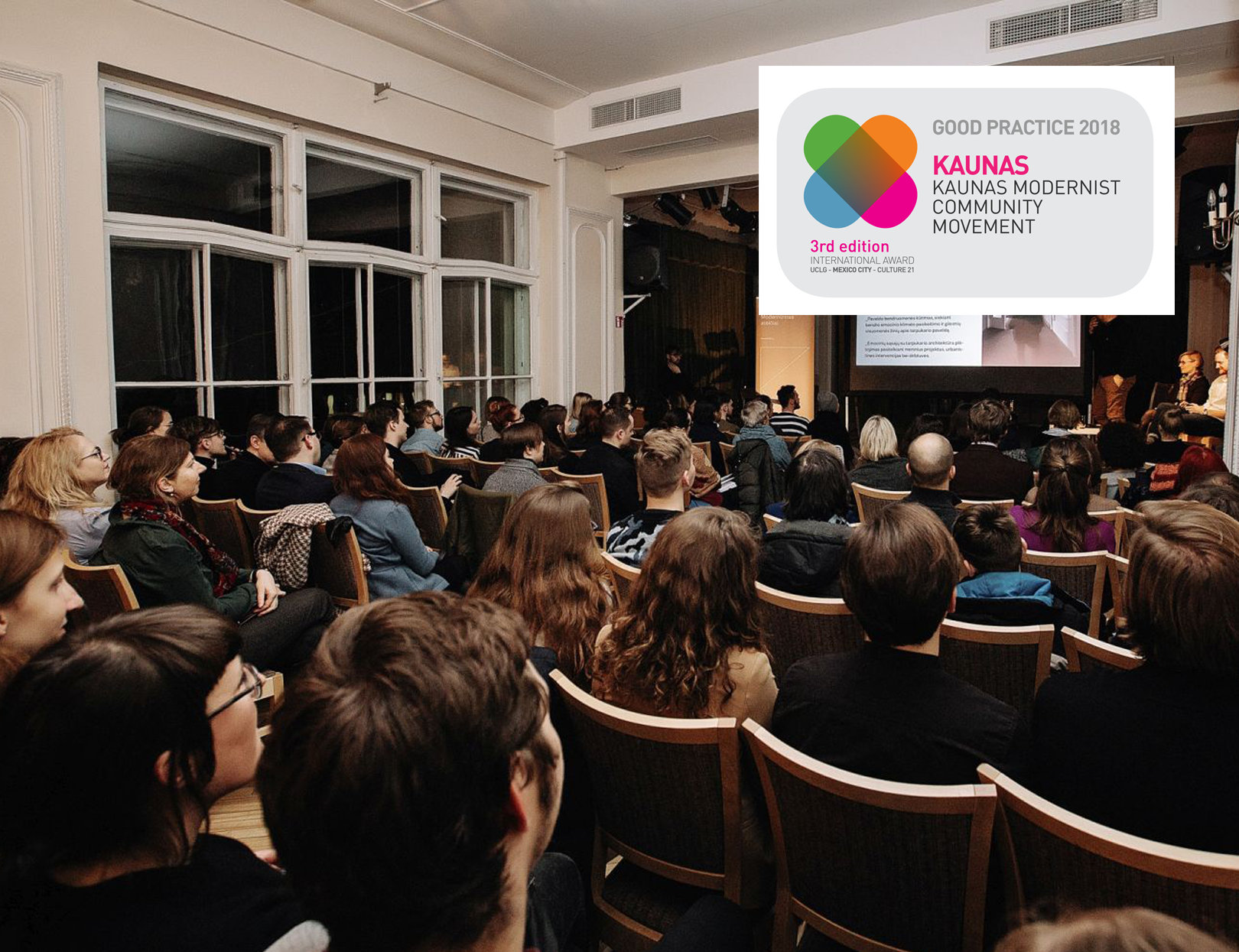