Iriga City is a medium-size urban centre, located 400 kilometres south-east of Metropolitan Manila. The city of 111 757 inhabitants (NSO 2015) spreads over a total landlocked area of 131.4 square kilometres – an exception in the Bicol Region, an extended peninsula oriented towards the Pacific Ocean and the Philippines’ internal seas.

Iriga City is at the centre of the Bicol region, a singular entity distinct from the rest of the Philippines as regards with geography, but also food, verbal culture, agro-economic profile, and a notable dynamism among its residents. In addition, Bicol’s inhabitants, strongly Christians, are also equally passionate about rituals inherited from the precolonial period.

The Intangible Heritage Trust for Iriga City (IHT-IRC) policy and system evolved organically through time, involving the present Mayor, Madelaine Yorobe Alfelor, incumbent since 2016, and during its previous mandate, from 2004 to 2013. The term “organic” refers here to the participation of citizens in the transformation of cultural heritage through conservative, yet innovative policies.

In this system, the organic creation of cultural identity shapes the coherence of the IHT-IRC, and in return, the IHT IRC is reviewed according to the community’s collective inclinations. Here, Iriga City applies to culture the same method of archiving and analysing that it applies in other sectors (agriculture, health, environment and other areas for sustainable development planning and implementation). In 2010, following the awareness that tourism picked up proportionally with enlarged festival formats, the city developed a strategy to become more attractive.

One particular project part of this policy was the transformation of the city’s annual weeklong festival, Tinagba, from a community gathering existing since 1974, into a competitive, Bicol-wide regional event, centred on an indigenous harvest rite from ancient times. This harvest-offering occasion also celebrates the feast of Our Lady of Lourdes. A theatrical orientation also emerged from the demands of more street dancing, to the enthusiasm of the residents.

In addition, other programmes related to intangible heritage have been developed over time. These programmes are embedded in social events taking place within specific barangays (the smallest political units), and involve local governments and citizens hand in hand. They include days-long chanting of the passion of Christ in a precolonial musical vocal/rhythmic tradition, Lancero de Iriga dance, aboriginal war dance called Rinampo, war dance tradition (performed with a theatrical rendering of St. Elena and her son Constantine searching for the true cross), etc.

As a result of its new cultural policy, the city eventually ranked 2nd to Cebu City in the best tourism event-festival category.

The IHT-IRC main goal is to enable the inflorescence of Iriga City’s performative expressions and linguistic heritage, building on the growth of these traditions in previous decades; and more securely connecting these traditions with the entire repertoire of sustainable development goals.

In this sense, the IHT-IRC deploys programmatic documentation and analysis to deepen the understanding of each of these traditions, of the innovations introduced by practitioners, and of the most valuable types of interventions for long-term sustainability

The IHT-IRC is a multifaceted system of projects and programs that enliven the intangible heritage of Iriga City. This heritage encompasses performances and other cultural activities inherited from aboriginal, Spanish colonial, American colonial, and modern vocal, instrumental, theatre and ritual performances, as well as the languages known as Rinconada Bikol and Mt. Iriga Agta. The project consists in undertaking an extensive process of documentation and analysis, with a new emphasis on the interlinkages with the UN Sustainable Development Goals (SDGs), under the common umbrella of “culture”.

Already experimented for more than three decades, the IHT-IRC has taken a much more formal character under the leadership of the current city Mayor. The project is currently in phase 2 (2016-2019), dedicated to establishing ties with sustainable development focused NGOs (e.g. the national organisation “Kaya Natin! Movement for Good Governance and Ethical Leadership”). A budget of PHP 3.3M is allocated yearly from the City Government to support the events and documentation work. Phase 1 (prior 2016) focused on organic growth, and phase 3 (2019-2021) will elaborate IHT-IRC further into city/urban planning.

As both a policy and system of actions, the IHT-IRC is implemented concretely in many ways, including: assistance to community sub-groups in staging specific events at different times of the year; the openness of local administration towards a more regional festival character; the logical/administrative support encouraging and facilitating innovation or reinvention of tradition; the typical commitment of financial resources to event organisation; and the atypical commitment of various resources (not necessarily financial) to the strengthening of social relationships through these performative forms.

The IHT-IRC is managed by the Iriga City government, in partnership with various performing arts groups of the city, some of which are kin groups or village organizations. In addition, Iriga City is working in tandem with TAO INC, Philippines’ only and pioneer cultural development corporation, and national government agencies involved in cultural development.
Since 2016, the IHT-IRC encountered several difficulties to be overcome:

The core idea behind the project is that intangible heritage, i.e. the sum of traditional songs, dances, rituals, theater and linguistic conventions that represents local sense of self and community, is a reflection of identity in ways that run deeper than tangible heritage.

The IHT-IRC rides on the long success of local government support to performing groups, and vice-versa. In recent decades, the local government gained enormous capacity in cultural administration and events planning. Simultaneously, the capacity of extended clan and village groups to work with local government — particularly in gaining access to training, advice, and materials from sources external to Iriga or Bicol — has increased. Moreover, the strong and inclusive community spirit is sustained by consistent support from the local government to citizen empowerment, an indicator of good governance.

The IHT-IRC intends to strengthen directly local performers in all art fields (song, dance, instrumental music, theater, and linguistic traditions), to make them avatars of sustainable development in other spheres of Iriga City. Compared to other cities and municipalities in Bicol, Iriga has come to enjoy a reputation for extraordinary exuberance, and wealth of well-differentiated and enthusiastically performed traditions. In addition, Iriga residents stitch together clan and village ties, through calendric relays from house to house, memorializing the simple fact of community and village.

The project targets 111 757 residents of the city, with the aim to improve their life and strengthen their pride regarding their own cultural and linguistic heritage, as well as to enhance their abilities to innovate within the sphere of their cultural identity. Iriga residents are atypical with respect to their adherence and devotion to traditions. For instance, they maintain thanksgiving rites that carry over from the atang, or offering rituals of pre-Christian Philippines, and tend to recognize the animist underlay of Christian practice.

The well-defined sense of community character of Iriga residents can also explain a concomitant extreme openness to gender equality, enlightened views on the environment, and techniques of good governance.

A separate Evaluation Team will be convened by the Iriga City Mayor to ascertain if the above KPI’s have been adequately met. This team, made of maximum five members, have to include at least one linguist and one expert on Performance Studies or Philippine Studies. Locally- and nationally-based members should be in equal number.

For the project to be successful, the “tangibility” of IHT-IRC outcomes should also be perceived through actual linked development work; e.g. the transition from poverty of the Agta communities.

The support brought by the local government through over the last decades have included (but not limited to): sustained and reliable financial assistance, access to training and advice from external sources, guidance in events management, opportunities to meet other performing artists locally and nationally, educational opportunities, livelihood, and citizen participation in good governance. This support has been matched by performing artists and groups, and their relatives and friends, with sustained dedication to skills improvement, study of tradition and/or innovation, and evident loyalty to art and to the city.

A key factor for the success of this project is the existence of potential links between the intangible heritage of iriga City and some of the United Nations Sustainable Development Goals, even if the nature of these links may also be described as intangible.

In as much as IHT-IRC is a continuation of decades of organic cultural development in Iriga City, and of continuous involvement of Iriga local government, one can expect that continuity will remain a fundamental principle of the programmes in the years to come.

Iriga was a candidate for the third "UCLG Mexico City – Culture 21 International Award" (November 2017 – May 2018). The jury for the award drew up its final report in June of 2016, and requested that the Committee on Culture promote this project as one of the good practices to be implemented through Agenda 21 for culture. 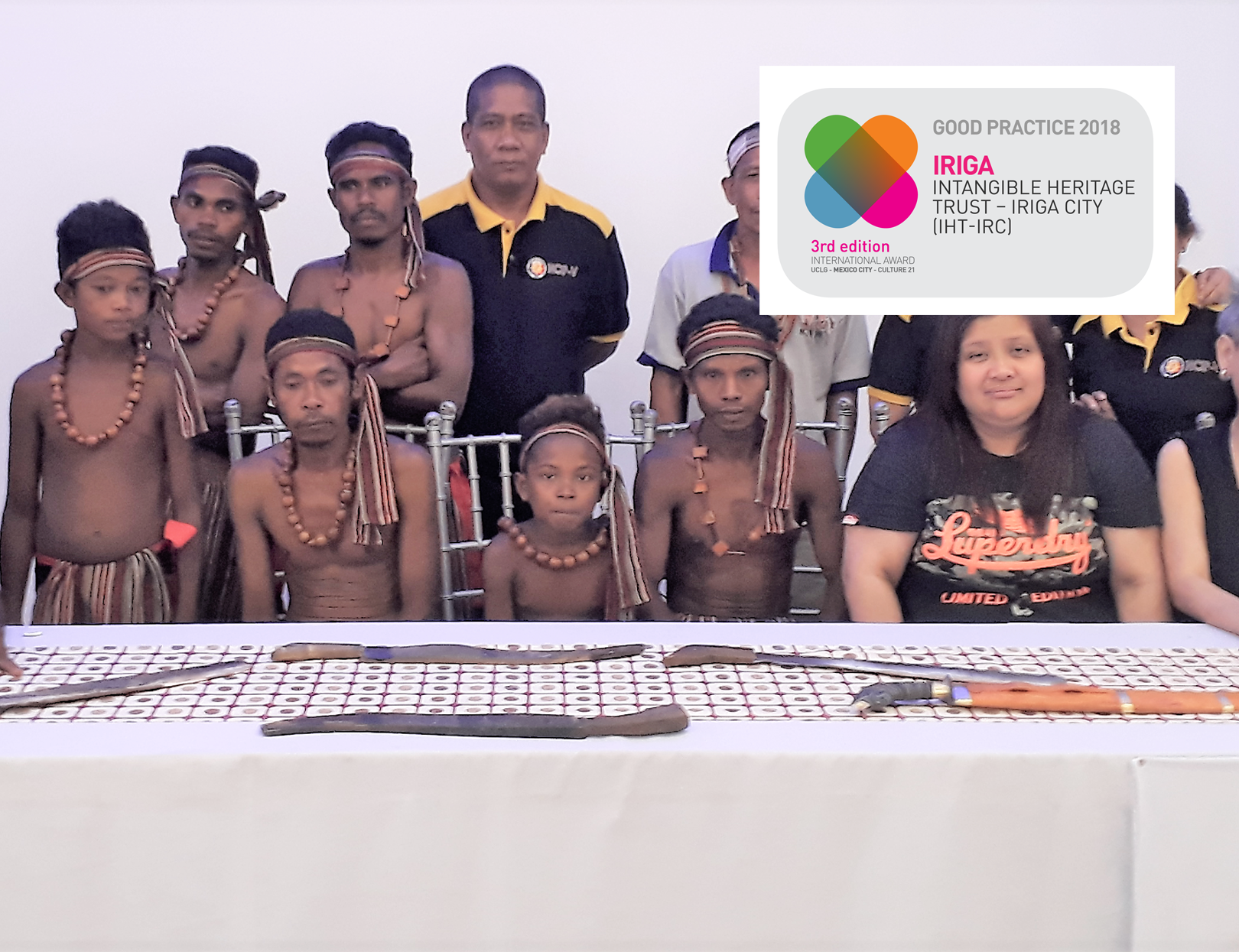