Santa Maria da Feira is a medium-sized city, located 20km south of Porto, with a total area of 216 km2 and a population of 140.000 inhabitants. The population density is higher than the Portuguese average of the North and Centre regions.

The economy is characterized by a consolidated and dynamic industry, with the largest cork processing centre in the world and one of the largest national concentrations in the footwear industry. Together, these two sectors represent more than 67% of the Municipality’s turnover, determining the strong specialization and export orientation of its economic activities.

The Municipality of Santa Maria da Feira has been recognized nationally and internationally for its cultural events, and has also implemented cultural policies considering culture as a tool to foster local economic development and civic participation, so the city hosts a huge number of extremely active and productive cultural agents, encompassing more than 120 local cultural associations, in areas as diverse as music, theatre, painting or dance.

Santa Maria da Feira has been committed to culture as a factor of identity, sustainable development and territorial cohesion. In 2018 was recognized as the Capital of Culture of the Atlantic axis.

Over the years, the Municipality established as prerogative aims the empowerment of cultural associative tissue, youth’s inclusion through art and youth employment. The prerogatives are:

Based on these prerogatives, the Municipality has been creating favourable conditions for the emergence of a unique environment, well positioned in the national and European context of contemporary artistic creation for the public space. In 2001, within this context was born the Imaginarius - International Street Theatre Festival, initially aiming at implementing a local project designed to broadening the scope and the cultural offer of the Municipality.

For more than two decades Imaginarius has been growing, involving the population and the endogenous resources of the territory in the promotion of cultural activities. Today Imaginarius is part of the European Route of Street Arts, whether through its presence, since 2014, in the Circostrada Network or through a set of partnerships with other festivals and creative projects, which contribute to the affirmation of Santa Maria da Feira as the Portuguese Capital of Street Arts.

Imaginarius follows a logic of cultural intermediation between creators, actors and audiences, democratizing the access to culture, as well as promoting inclusive activities that promote diversity and freedom of expression for audiences of all ages. In this sense, it has a direct relationship with several commitments of Culture 21: Actions. Imaginarius seeks to articulate these commitments with the UN 2030 Agenda Sustainable Development Goals, in particular in pursuit of Goals 4, 8 and 11.

Since 2001, Imaginarius - International Festival of Street Theatre has been focusing on major international productions and the development of original creations. In this way the festival gives space to the experimentation, imagination and creativity of artists, namely in the use of the contemporary artistic language and in the development of cultural and artistic projects applied to the public space.

Within the Imaginarius project the main actions are carried out essentially through four axes:

1. Programming
Imaginarius
During the festival, artists have the opportunity to present their artistic creations, exploring the creativity and aesthetics of the art in the public space in a properly organized program.

Mais Imaginarius
Mais Imaginarius is an international competition that presents a challenge to the artists who should present proposals approaching the public space in its most diverse perceptions, testing formats and models, towards the construction of new artistic identities.

Imaginarius Infantil
This project is an audience development project that aims at educating new audiences and seeks to stimulate in children the desire to enjoy, think and act in the public space. The shows, workshops and experiments carried out have allowed participants to discover other ways of seeing and feeling the reality.

Imaginarius 365
It aims at extending in time the projects developed in the Imaginarius programme, elaborating an annual programme based on the artistic and creative residences taking place at the Imaginarius - Creation Centre (ICC) or based on the mediation processes, workshops and training activities addressed to local cultural actors and other diverse communities.

For three days, Imaginarius occupies the public space of the historic centre of the city, in a unique and international environment attended by hundreds of artists of the most diverse nationalities.

2. Training
Imaginarius Creations
Imaginarius has been developing a program to support contemporary artistic creations for the public space, through an integrated platform that supports creative processes throughout its value chain, from the idea, to the creation and debut, and to the national and international dissemination.

Support to Local Creation
The Municipality of Santa Maria da Feira, annually, invites local artists and companies to present proposals for original creations aiming their absolute premiere in the main program of Imaginarius - International Festival of Street Theatre of the following year.

Workshops
The capacity building of local artistic structures is one of the most important aspects of Imaginarius and consists, above all, in the realization of workshops, addressed to diverse audiences.

3. Opportunities and participation
Imaginarius PRO
This programme is aimed at strengthening the partnerships among professionals in the Street Arts sector participating at the festival.

4. Cultural infrastructures
Imaginarius Creation Centre - Art and Public Space (ICC)
ICC is aimed at strengthening the cultural and creative ecosystem of the territory. It reinforces the dynamics of the artistic production in the fields of street arts and circus, opening also new dialogues with other artistic disciplines for public space (visual arts, media arts, music, design, architecture and photography). ICC develops its activity in three areas: a) Creation in residence; b) Cultural participation of communities; c) Internationalization of artistic projects.

In terms of reference and territorial affirmation, the Municipality incorporated cultural events and activities into its local politics and strategy, which became the brand and identity of its territory and its population. The financing of Imaginarius Festival and ICC are directly included within the annual budget of the Municipality of Santa Maria da Feira. Other public institutions also contribute, such as the Directorate General of Arts / Ministry of Culture, Regional Directorate of Northern Culture, and Tourism of Portugal.

All this dynamism has provided a significant improvement of institutional cooperation and the strengthening of the territorial cohesion of Santa Maria da Feira, especially through capacity and training of local cultural and creative agents.

Within the local government, the municipal cultural sector activity was strengthened, and jointly with other municipal services, contributed to the implementation of a new vision of urban and land-use planning, namely with regard to the refurbishment of heritage and the use of public space for presentation of cultural and artistic projects.

Collaborative partnerships with local, national and international cultural and creative agents have been established, as well as proper infrastructures and equipment for contemporary artistic production and creation. In this context, Imaginarius - Creation Centre is prepared to receive the artistic residences of cultural and creative agents from all over the world, who wish to develop their creativity in our city.

The support from private sector comes from cultural patronage and sponsorships of local industries and trademarks that have been associated with the project.

By becoming a creative territory capable of attracting artists and creatives from different countries, the city took a step forward strengthening the local economy through the development of new opportunities and business models, supported by the creativity and innovation of its cultural and creative industries.

Driven by its creative and cultural ecosystem, this territory has witnessed the implementation of pedagogical and educational projects, involving the participation of all its population, not only in the quality of audience attending performances, but as actors themselves integrating the performances, in a direct collaboration with artists and creators.

Studies have determined that Santa Maria da Feira's cultural activities audience is heterogeneous, ranging in age from 25 to 50, looking for new cultural experiences, remaining in the territory for more than one day and generating important revenues that boost the local economy.

The evaluation of cultural events and projects developed directly by the Department of Culture, Tourism Libraries and Museums usually occurs after the end of the event, through two types of studies:

The municipality has supported this initiative and invested widely in culture, positioning Santa Maria da Feira at the forefront among medium-sized Portuguese municipalities.

The cultural dynamics of Santa Maria da Feira are reflected in the activities carried out, not only through Imaginarius, but also in music, cinema, traditions and medieval and thematic recreations, such as the International Music Festival of Paços de Brandão, Luso-Brazilian Film Festival; Basqueiral (urban music festival); World Dances (Multicultural Dance Festival); Fogaceiras Feast (local tradition); Medieval Journey in Land of Santa Maria (the largest medieval re-creation of the Iberian Peninsula), and Perlim (Christmas’ thematic Park).

This initiative is annually included in the activity’s plan and budget of the Municipality of Santa Maria da Feira, and constitutes therefore an objective’s commitment regarding the continued implementation of the local cultural strategy.

Furthermore, this project has its own organizational dimension in the headquarters of the City Council, supervised by the Deputy-Mayor for Culture, Tourism, Library and Museums, Mr. Gil Ferreira, and being composed of technicians with multidisciplinary academic formation in cultural and financial management, marketing and communication, artistic production, entertainment, etc.

Santa Maria da Feira was a candidate for the third "UCLG Mexico City – Culture 21 International Award" (November 2017 – May 2018). The jury for the award drew up its final report in June of 2018, and requested that the Committee on Culture promote this project as one of the good practices to be implemented through the Agenda 21 for culture.

This article was written by Gil Ferreira, Deputy-mayor in charge of Culture, Tourism and Library and Museums, Santa Maria da Feira, Portugal. 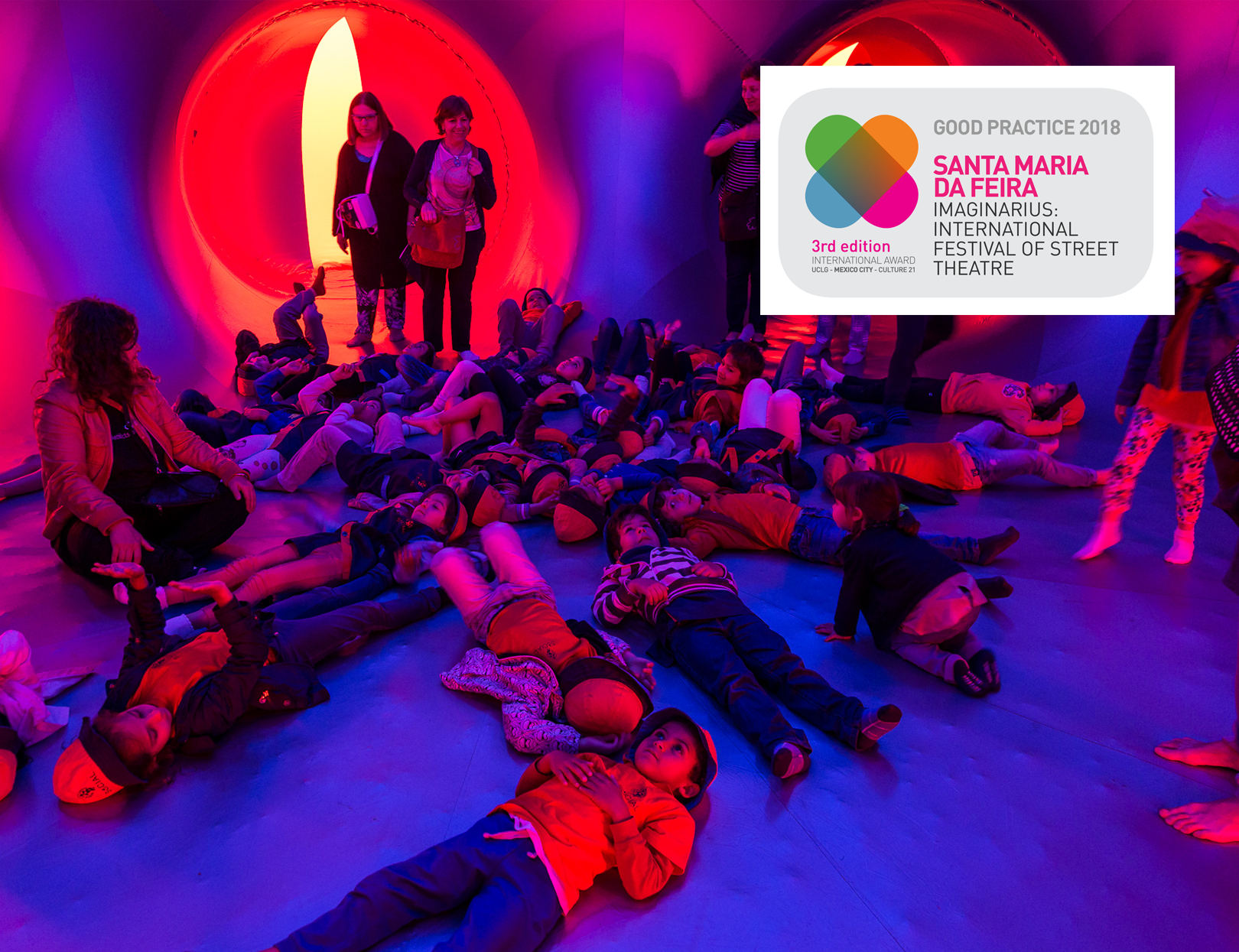