Culture without walls, culture for all

The coastal city of Sfax (Taparura in antiquity), is the second-largest economic and demographic hub in the country, home to 8.5% of the total population, 40% of whom are young people. Its medina is surrounded by high 13th century walls, and sits in the centre of two urban expansions that date back to the colonial and post-colonial periods.

With 235 kilometres of coastline, Sfax has played a leading role in national and international trade for centuries. The city also has a rich industrial and artisan sector. Furthermore, it is the centre of olive cultivation and a major olive oil producer in Tunisia. This dynamic economy, combined with a university community of 50,000 students enrolled across 35 academic institutions, attracts many inland citizens looking for work.

Before the fall of the dictatorship in 2011, Tunisian local cultural policy was restricted by poor governance and the partial censorship of cultural activities, which were generally overseen by official government bodies or pre-selected associations.

This changed drastically after the popular uprising of 2011, which led to the enactment of new laws allowing citizens to organize cultural actions. As a result of these changes, the city has strengthened its work with the local community network, and further enables cultural actors to promote cultural initiatives.

Both in Sfax and throughout Tunisia, the cultural sector was widely expanded at the same time that the country established the rights to freedom of expression and organization.

In the midst of this cultural boom, the city was faced with a lack of infrastructure. Furthermore, the existing infrastructure was unable to meet the growing demand of citizens and cultural actors to assert their right to culture. The aim was to make the right to culture a concrete reality by providing moral and material support to professionals in the region. This would improve their potential, which had been neglected for so long under a centralized national and local development policy.

To meet these needs, the city has started working closer with associations, financing cultural events, and helping them create spaces to host shows and offer training on organizing or managing activities.

One of the core elements of the cultural policy was the population’s democratization and openness to the intellectual and cultural life of Sfax.

The main goal is to reclaim neglected spaces for cultural and creative purposes, to fix the lack of cultural infrastructure in a city with such a high population density, a very young population, and a strong, dynamic economy.

This project aims to overcome the conception of culture as elitist by reaching out to sectors of the public that have traditionally been excluded, such as rural communities, people in hospitals, or incarcerated members of society. It not only creates closer proximity between the public and cultural activities, but also encourages people to create and express themselves in a sector known for its diversity, coexistence, and the sense of fulfilment it can give.

Finally, the initiative aims to develop cultural infrastructure through a policy of decentralization and support for private and citizen initiatives.

The re-emergence of the notion of citizenship after decades of dictatorship has led to more participation by inhabitants in the cultural life of Sfax, which has a rich cultural, intellectual, and artistic heritage. In 2013, the city launched the “Sfax: Culture Without Walls, Culture For All” programme to update local cultural infrastructure and create cultural centres in different institutions. Over the course of multiple projects, the city gradually increased its chances for qualifying to host and organize large-scale cultural events. This culminated in being designated the Arab Capital of Culture in 2016. By that point, 70% of cultural events occurred in the city’s public spaces, drawing nearly 200,000 people.

To overcome a lack of infrastructure, the “My Part in Culture" initiative aimed to organize events right in the streets. Twenty stages in public spaces have hosted over 500 street art shows, including “Bab Diwane” and “Dakar Garden”. These have taken place in the city centre and on the outskirts, and 3 public gardens have hosted works of art such as “Ser el Nawar” or “Secret of Flowers”. Emphasis was placed on the marginalized and rural areas of Sfax that suffer the most from a lack of activities and infrastructure. These programmes also primarily target women and youth.

As part of a prison reform programme, cultural activities like theatre and cinema were regularly organized in the Sfax civil prison. This resulted in the creation of cultural spaces within the prison itself in order to raise awareness, provide entertainment, and help prisoners break from their routine and desolation.

Under the “Culture for Everyone” programme, agreements were reached with schools and higher education institutions to create cultural centres for university students and pupils from elementary schools and secondary schools.

By 2017, cultural life in Sfax had improved at every level, but difficulties around weak infrastructure persisted. One example was the closure of the theatre and cinemas for their renovation.

The City of Sfax increased its efforts to develop cultural infrastructure, until it was named the Arab capital of cultural in 2016.

Thanks to the mobilization of civil society and the community of stakeholders, the regional budget for culture increased considerably, doubling almost four times, in spite of the fact that the official allocation remained the same from one year to another. In 2016, when Sfax was the Arab Capital of Culture, the programme had a budget of DT 7 million Tunisian dinars.

Through this project, the City Hall and the regional delegation of Sfax worked together on cultural and urban landscape planning policies in order to facilitate scheduled cultural activities. Showcasing works of art in public spaces has contributed to the beautification of the city's landscape. Additionally, public enthusiasm for cultural events in public spaces has re-energized the city’s shops, hotels, and restaurants.

The project has transformed the city’s cultural and associative landscape, resulting in 10 private spaces dedicated to culture as of 2018, compared to only one in 2013, and three of them are located in marginalized areas: Joker Prod in Sfax; Green theatre in Cité el Bahri; the Mask Space in Mahres; Workshop 271 in Agareb, and more. The number of cultural associations also doubled from 160 to 330 between 2013 and 2018.

The project has transformed the City's cultural and associative landscape, with many new private initiatives and double the number of cultural associations and clubs.

The city’s focus on raising awareness about initiatives in small villages and poorer neighbourhoods has introduced youth to art and culture, subsequently moving them away from disadvantaged situations. The increasing participation of women in these events has also been noted, even in the most conservative circles, where culture plays a significant role in creating more progressive social ties.

The committee meets regularly with the administrative authorities and the administrative board, made up of representatives from cultural institutions and trade unions. A unit was also established that is dedicated to data collection and assessment of the administration, as well as a cultural council that incorporates associations and regional institutions. The council assesses the general guidelines of cultural policy and ensures quality and diversity in cultural activities. In 2016, a cultural council bringing together more than 100 intellectuals and civil society representatives was tasked with assessing the “Sfax Arab Capital of Culture” event.

Four main factors contributed to the success of this project. First, a motivated public seeking culture had to be managed and given public spaces. Second, the project has benefited from the commitment of a large network of 1681 associations, including 319 cultural associations.

Third, providing spaces in schools and universities, as well as the teachers’ participation have both helped include a large number of youths. Finally, the designation of Sfax as the 2016 Arab Capital of Culture by ALECSO (Arab League Educational, Cultural and Scientific Organization) was decisive in increasing the budget for developing public spaces and facilitating exchanges with cultural actors.

Becoming the “Arab Capital of Culture” in 2016 highlighted the region’s cultural transformation since 2011. However, issues of space and infrastructure remained. This led to the creation of the “Chott El Krekna” project to develop public space throughout the city. It used 3 hectares on the coast to build a cultural complex, a cultural cafe, recreational spaces, a floating stage, and provide a large amount of space for street arts. The project was financed by the municipality and the Ministry of Culture, at an estimated cost of DT 6 million (Tunisian dinars). The municipality will undertake responsibility for the project’s completion. A technical study was carried out by a private consulting firm in coordination with the steering committee for the cultural event.

Other future projects include public gardens as spaces for book exchanges, and new public stages in the city's popular neighbourhoods such as Cité El Habib and Sidi Mansour.

The City of Sfax was a candidate for the third “UCLG Mexico City – Culture 21 International Award” (November 2017-May 2018). The jury for the award drew up its final report in June of 2018, and requested that the UCLG Committee on Culture promote this project as one of the good practices implemented under Agenda 21 for culture.

This article was written by Rabiaa Belfguira, Regional Delegate for Culture in the City of Sfax, Tunisia. 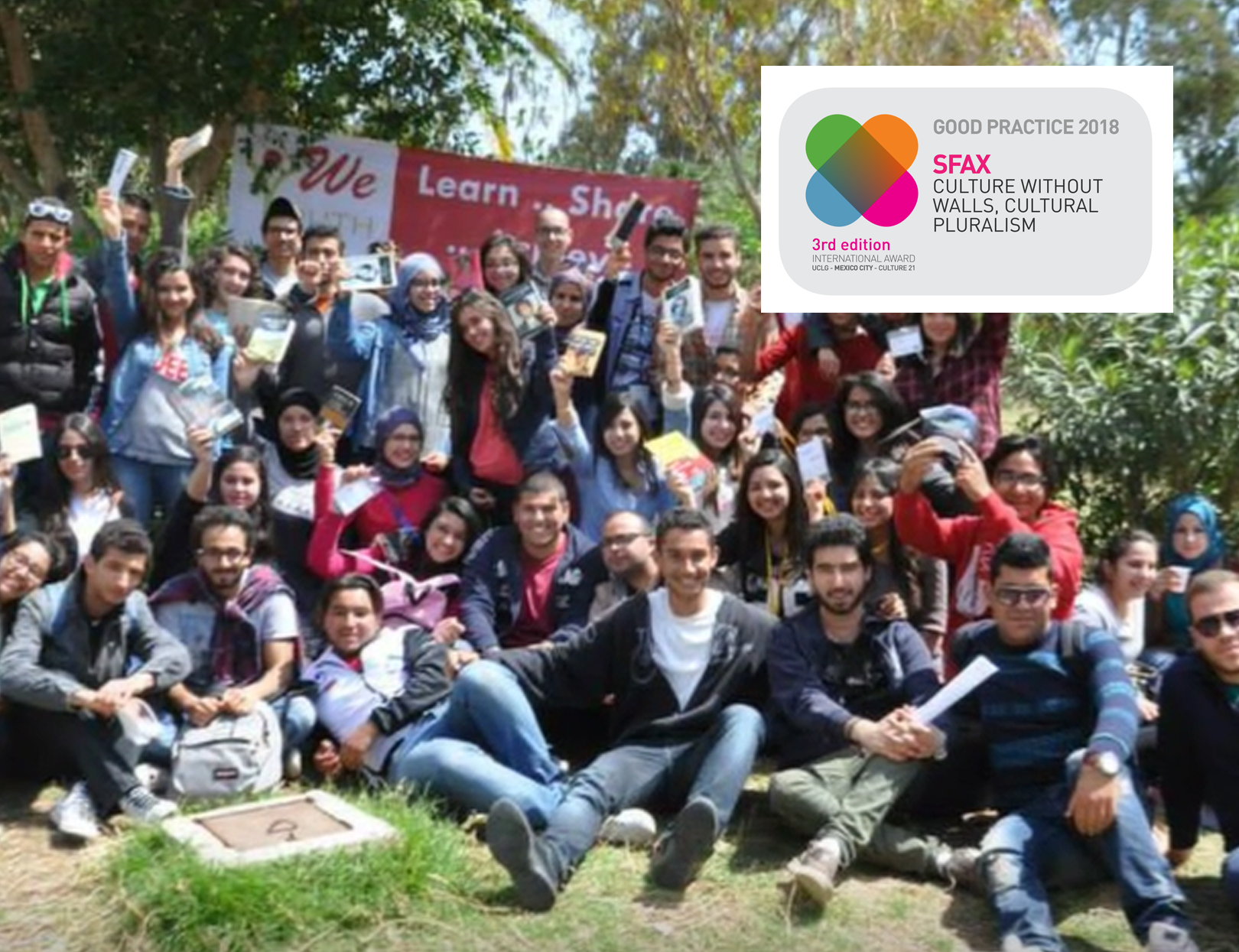