Youth and cultural citizenship in Yopougon

With a population of 1,071,000, and located in the city of Abidjan, Yopougon is a lively cultural centre where youth, artists, cultural entrepreneurs, and non-profit organisations, all play an essential role. Deeply affected by the social consequences of the political crisis, Yopougon's cohesion was threatened by partisan conflict in spite of citizens' efforts to establish intercultural solidarity. Faced with the challenge of living together in accordance with the Ivorian New Society Project, the municipality has supported dynamism and creativity for youth, including their new artistic and social practices. There is a need to develop frameworks for municipal policy and intervention to meet the aspirations of youth. This has led the municipality to create a Municipal Youth House, in addition to carrying out cultural actions related to the environment, governance, and artistic and cultural practices. Given the initiative shown by youth in organising neighbourhood community life, and supported by a proposal by the Department of Sociocultural Affairs (DASC), the town hall adopted the Youth and Cultural Citizens programme, to establish guidelines for cultural initiatives. It also helped to shape cultural initiatives for youth, in addition to recognising their role as major cultural stakeholders. Finally, it has led to the formation of partnerships with neighbourhood associations that strengthen cultural life, which municipal activity alone was not sufficient to achieve.

In previous administrations, culture was not a part of municipal policy. Along with a proposal by the DASC, the City has adopted the previously non-existent guidance tools and means necessary for municipal action. These have been adapted to local social, cultural, and economic needs. Aware of its cultural richness in music, intangible heritage, cultural tourism, and education, the town hall developed a Strategic Plan to promote cultural potential in 2012. With one of the highest enrolment rates in Abidjan, and some of the best Ivorian secondary schools including the lycée des jeunes filles (All-girls Secondary School) and the lycée d’excellence (Secondary School for Excellence), the city has vital partners for municipal cultural action. Due to the cultural dynamism of youth associations, in 2013 the city developed a cultural support programme: Youth and Cultural Citizenship. Between 2014 and 2015, it subsequently adopted an Infrastructure Management and Cultural Development Support Plan to progressively implement an infrastructure network dedicated to literacy, information, music, the performing arts, and cultural practices. In 2015, the city implemented a support strategy for developing public literacy, and an education strategy for musical training. These guideline documents have been developed along with cultural stakeholders and civil society organisations, in which technical and financial support is supplied by United Nations agencies, the European Commission, or the International Organization of the Francophonie. To demonstrate its own commitment, the municipality also contributes financially.

Along with a proposal by the dasc, the city has adopted the previously non-existent guidance tools and means necessary for municipal action. these have been adapted to local social, cultural, and economic needs.

The programme shares the same vision of Agenda 21 for culture. Through a richness and diversity of cultural expressions, the goal is to establish the conditions for peace in a population traumatised by division and political violence. It seeks to build a relationship of shared responsibility with youth, capable of encouraging collaboration among many of society's stakeholders through their local presence. It also strives to promote cultural diversity and capacity building for youth, as well as support the professionalisation of young cultural entrepreneurs, with a focus on developing artist networks, thereby enabling them to live off of their talents. The goal is to involve the maximum number of inhabitants by taking income into consideration, and subsequently avoiding the exclusion of more disadvantaged people. The initiative favours cultural expressions by youth by considering communities such as troubled groups, those who are illiterate, migrants, and women.

After emerging from the post-election crisis in which youth were used by those in power for political gains, it is vital to rebuild the relationship with youth by relying on their dynamism and creativity to create the conditions for peaceful coexistence. As a result, the town hall has decided to aid in structuring youth organisations and support their initiatives, along with the following

The programme is comprised of four areas:

A communal youth council with technical and financial support was set up to organise youth associations.

The project has enabled the involvement of youth in local development initiatives, which highlights:

it is vital to rebuild the relationship with youth by relying on their dynamism and creativity to create the conditions for peaceful coexistence.

The assessment of the programme remains to be developed, but is currently being carried out during meetings of municipal service managers, town council meetings, or during Communal Youth Council meetings. The indicators used are the number of actions carried out, budget, the number of people affected, and the degree of satisfaction.

To ensure continuity of the programme the town hall will maintain its technical support, which includes capacity-building, as well as creating a platform for collaboration between the DASC and the CCJY, and financial support through an annual subsidy to the CCJY. A partnership with the DASC is planned for the creation of the multimedia library - a place within the youth centre dedicated to citizens and their knowledge .

The area of Yopougon was a candidate for the second International Award "UCLG – Mexico City – Culture 21" (January - May of 2016). The jury for the award drew up its final report in June of 2016, and requested that the Committee on Culture promote this project as one of the good practices to be implemented through Agenda 21 for culture. 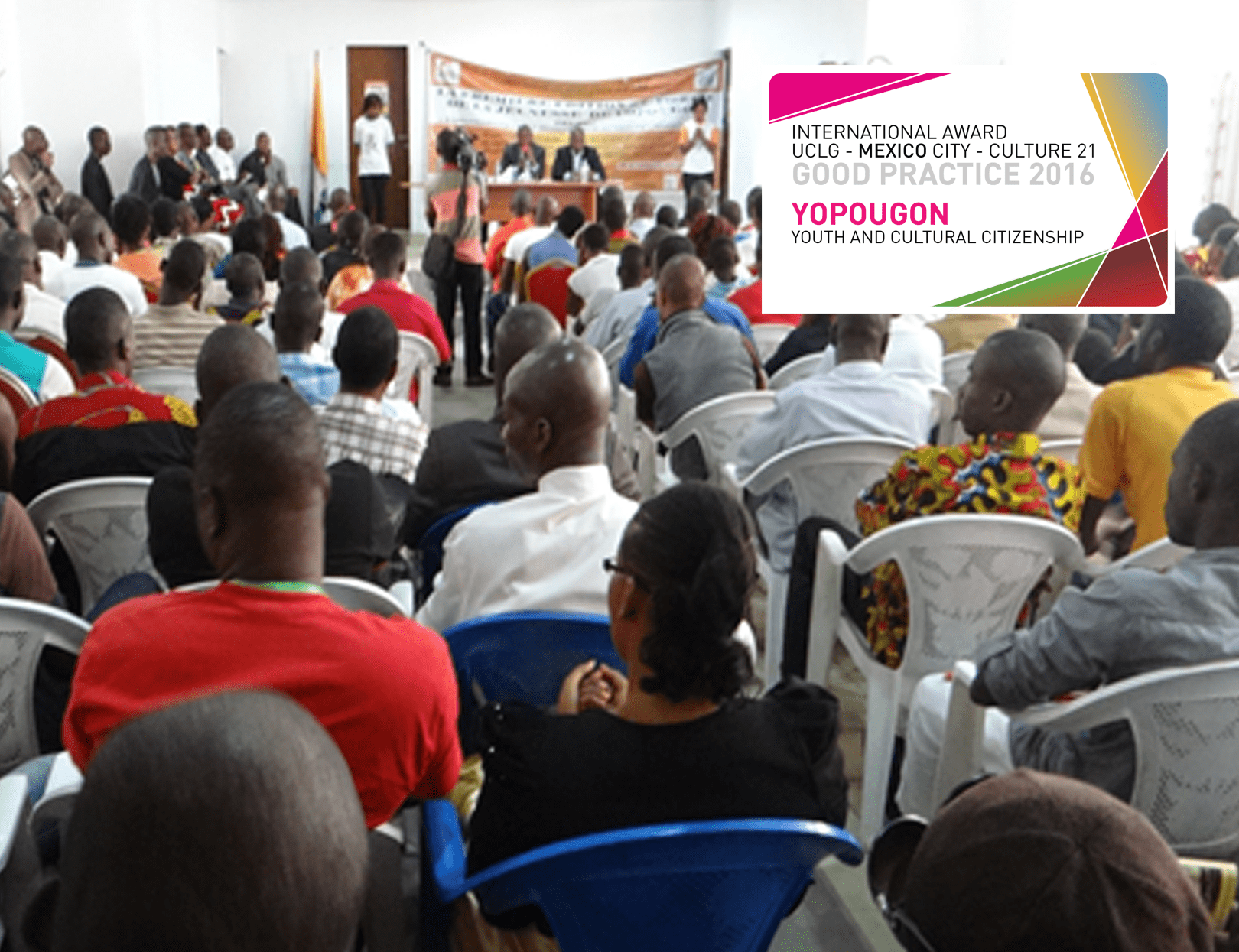