Points of culture in Panama

Panama City was founded 500 years ago and is the oldest European settlement in the Pacific Abya Yala region. The metropolitan area is part of the Panama District, which is home to about 60% of the country’s total population. Panama is considered to be one of the most globalized capitals on the continent, with a thriving economy based mostly on various services linked to the inter-oceanic route. It also boasts a significant level of cultural and biological diversity.

The city sits on a very narrow strip of land that is 2,561 km2, and is made up of a highly complex, multiethnic, and multicultural society. Geologically, the isthmus is part of Central America, while culturally, it is much more unique. The city has historical links with South America, specifically Colombia, Peru, and Ecuador as a result of Spanish colonialism. Additionally, the area is home to a significant Afro-Panamanian diaspora. This is the result of the waves of Afro-Antillean immigration between 1846 and 1914 that arrived for the construction of the transisthmian Panama Canal Railway. This has had a profound impact on Panama’s social makeup. Since the 20th century, it has become increasingly connected with the United States, economically and politically.

In Panama, culture has not been a mandate under local governments, except for financial support given to isolated events. Of course, these do not reflect a programmatic approach. This institutional failing at the municipal level is the result of management methods established by the central government over the last 40 years.

The prevailing view in Panama has always conflated culture with folklore, or understood culture as a synonym for high culture and artistic creation. This propagates the idea that culture is simply a creative excess or social wealth accessible only to a small minority. This superficial and elitist understanding of culture excludes multiple and varied forms of culture.

"Points of culture" is an exercise in the governance of culture, cultural rights, and social inclusion in which schools as community spaces to develop cultural, artistic and social processes.

In 2012 the former mayor of Panama City, José Isabel Blandón, promoted the creation of a Ministry of Culture that provided a regulatory framework for updating the cultural policies of today's National Institute of Culture (INAC). The law was passed unanimously in the National Assembly, but subsequently vetoed by the Executive, and the issue was not reopened for two years.

In 2014, the City Hall of Panama, alongside the Directorate of Culture and Citizen Education, set out a programmatic strategy for the five-year period up to 2019. The goal was to ensure that the cultural rights of all people and communities in the Panama District are recognized, promoted, and guaranteed within a society that respects equality, human dignity, and non-discrimination.

One of the emblematic programmes under this municipal public policy is that of “Points of Culture”. The project was originally developed by Célio Turino in Brazil, and uniquely adapted for Panamanian life. They involve cultural centres and citizens in formal schools that offer a minimum of eight artistic, educational, and leisure activities on Saturdays. The result is that one school in each township will act as a community space and serve as an incubator for cultural, artistic, and social processes. Special attention is paid to the development of life skills that bolster citizenship and communities while strengthening the social fabric.

In 2019, Panama was selected as the Ibero-American Capital of Culture and also designated a UNESCO Creative City of gastronomy. Additionally, it has recently joined Ibercocinas (Ibero-cuisines), which is a local coordination effort focused on the main overall agendas of culture and development.

The main goal is to create a community ecosystem in six public schools under the Ministry of Education (MEDUCA) where cultural governance and cultural rights can be enhanced through a recreational training platform. The initiative will take a multidisciplinary, intercultural, intergenerational, and citizen coexistence approach.

The City Hall has access to facilities, instruments, materials, and adequate spaces within the schools, to promote community consultation and safety processes on the campuses. Ministry of Education schools and their educational communities offer space and logistics support.

The City Hall also offers an ongoing training cycle in partnership with higher education institutions. This is added value for tutors, artists, and others who promote cultural management issues, project development, and pedagogical approaches in arts education. Additionally, the population has regular and organized access to community learning processes for the production, management, and socialization of goods and services that are democratically defined as essential for peaceful coexistence, plurality, and cultural diversity.

The programme's successful pilot phase was called "Creative Summer". It took place from 2015-2017 and had 5.000 attendees. Positive feedback by participants and the education communities reaffirmed the project's relevance to the community.

"Points of culture" has successfully established dialogue on cultural rights (outlined in the Fribourg Declaration), Agenda 21 for Culture, and the SDGs in municipalities across the country.

The programme has an impact evaluation strategy that will use a mixed methodology. The approach uses a system of variables and indicators constructed from an established baseline, and formed by data taken from the pilot phase and from the project’s implementation between April 2018 and December 2019.

With respect to cultural rights, various indicators will evaluate the goal of increasing the population's access to creative spaces and activities for education, culture, and recreation. This will involve a human rights approach that encourages participation in populations with the lowest attendance across the Panama District.

To evaluate the level of inclusion, indicators will measure the objective of providing education centres with the minimum conditions required for carrying out the scheduled activities in public spaces.

Other indicators will assess progress in relation to the governance of culture.

Part of the success of the Points of Culture project is the new relationship dynamics it promotes with the State from local governments or communities. The main role of the national government is to facilitate processes while more local entities must have the adequate organizational freedom to self-manage all aspects of life within the territories.

Although the success of each cultural centre will vary according to the specific driving forces of each community, the high level of inequality across Panama City highlights the vital need for these arts and culture facilities, and emphasizes the importance of this project.

The points of culture project aims to create an ecosystem that will help rebuild the social fabric. To this end, there have been clear changes to individual and collective views of culture, which increases chances for the project's success.

Efforts are being made to ensure that the district of Panama has a law on culture, which includes the Points of Culture programme as one of its main components. Although the above depends on the political will of the Municipal councillors, as the project develops, the aim is to increase awareness within communities about their cultural rights.

Panama was a candidate for the third “UCLG Mexico City – Culture 21 International Award” (November 2017 - May 2018). The jury for the award drew up its final report in June of 2018, and requested that the UCLG Committee on Culture promote this project as one of the good practices implemented under Agenda 21 for culture.

This article was written by Alonso Ramos, Deputy Director of Citizen Education for the District of Panama / Betania Township, Panama. 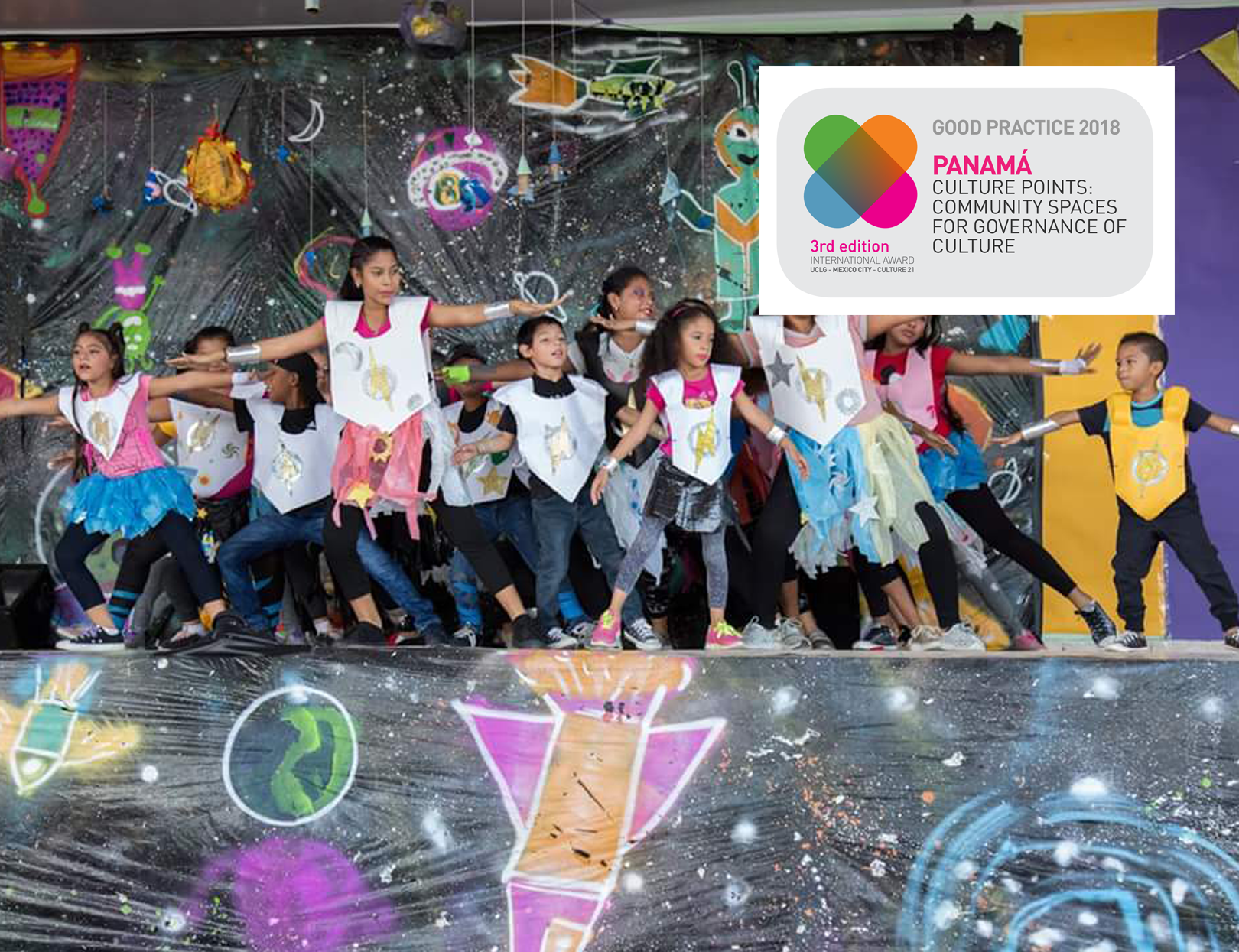