Izmir Mediterranean Academy as a model of governance of culture

Izmir is the third largest city of Turkey, located near the Mediterranean-Black Sea passage, opened to the Balkans, Europe and to the Middle East through Anatolia. Since the 1930s, the city, which has a rich and diverse cultural heritage, is connected to the world economy through its international fair. The city, which enjoys a liberal and secular atmosphere, ranks above the national average in terms of urbanization and literacy rates, gross domestic product per capita, and has strong financial performance.

In a global context where the culture industries grow rapidly and tend to form the basis of the economy, the major part of the contemporary art and cultural production is supported by private sector and corporate bodies, is highly concentrated in Istanbul. Izmir, which for a long time lacked the necessary attention from public and private cultural investors, has over the past nine years, started to gain more economic and cultural attention, enabling a reverse migration of cultural actors and a sustainable economic growth.

Despite the city’s richness in terms of cultural infrastructure and the diversity of stakeholders, the tendency of cultural actors, universities and public and private institutions to act individually has been an obstacle to setting up large scale collective goals, and to the elaboration of city-scaled cultural planning strategy.

In 2009, Izmir Metropolitan Municipality organized a cultural council to address various issues related to the cultural sector. Participants, including representatives from the artistic and intellectual spheres and public opinion leaders, agreed by consensus on the definition of a cultural vision for the city.

The cultural vision for Izmir developed by the cultural council in 2009 included turning Izmir into a city of design and innovation, taking into account public participation and that respects human dignity, as well as into a networking hub among major Mediterranean cities.

In 2012, Izmir Metropolitan Municipality launched the Izmir Mediterranean Academy Project, an intermediate institution with the aim to enhance communication and cooperation between all these actors and fulfill the new vision that had been defined for Izmir to become “a Mediterranean center of culture, art and design”.

In parallel, the Cultural Council developed the city’s strategic plan, integrated into the 2014-2023 Izmir Regional Plan developed by Izmir Development Agency, which has been used as a reference document by the NGOs, public and private actors.

The main aim of this Project is to ensure the sustainable cultural development of Izmir, by empowering the members of the civil society in the cultural sphere, and introducing a new governance mechanism for culture.

The Izmir Mediterranean Academy, an autonomous branch of the Municipality, is a unique model of governance of culture. It has two sections:

Each unit also refers to an advisory board composed of scholars, experts, researchers, artists, and representatives of the NGOs active in the aforementioned thematic areas. The coordinator and the board members work voluntarily, for the promotion of their respective fields. In total, the advisory boards have 127 members.

The Steering Committee, which appoints a coordinator for each area, is composed of the General Secretary of the Municipality, members of the Science Board and the coordinators.

The Academy’s second section, the “administrative unit", is in charge of budget execution and implementing the decisions taken by the Steering Committee, developed by each coordination unit (“arm's length model”), within the existing local governance legal framework.

The main actions carried out for the project include:

The Izmir Mediterranean Academy has been established for working in priority areas defined by the cultural council: history, design, culture and arts, and ecology.

These actions can be divided into four different phases:

The project’s partners include advisory board members for "history", "design", "culture and arts", "ecology", "local development and community" (established in 2019). Participants of the Academy’s activities also include several universities in Izmir, associations, several branches of the Metropolitan Municipality, among many others.

OBSTACLES
One of a kind among other cultural institutions in Turkey, the Academy faced administrative difficulties such as the definition of this new form of public body. To overcome these obstacles, it relied heavily on communication, with the dissemination of free reader-friendly brochures in all cultural centers, cafes and universities. Interdisciplinary forums and meetings, organized by ICPI, provided a better understanding of the project amongst cultural actors.

Izmir Mediterranean Academy project had an impact on the methodology and content of the Municipality’s policies, and increased interactions between the various branches of the Municipality and with civil society. Today, the city welcomes hybrid forms of decision-making and a number of advisory boards for specific branches. The main mindset shift has been the tendency towards forming strategic long-term goals rather than project-based planning.

Cultural life in the city is bustling, and the number of local actors in art and culture increased with the arrival of newcomers from Istanbul, making platforms like ICPI a welcoming space for collaboration. Universities are also taking an active part in the cultural life of the city.

Several study groups and platforms were established (kültürLab, Cultural Mapping Project, etc.), helping the Academy to reach a broader target, including many private and public institutions.

There is also an increase in the number of researches about Izmir’s urban cultural context. Some of them are published in the peer reviewed journal of the Academy, Meltem, or published as a special issue of ICPI's journal Pla+form.

Overall, around 70 000 people read the Academy’s publications, and 10 000 people have attended the Academy’s events and exhibitions. The city transformed from a tourist destination to a city of culture and intellectual events, with an enhanced interest for historical heritage and ecology.

The project is evaluated, on the content, by the Scientific Board and the Steering Committee, twice in a year. It is evaluated on the Academy’s performance program. Performance programs are published annually, disseminated and broadcasted online by the Municipality. They set targets for a number of indicators for each activities developed.

The Academy has become an important hub for Izmir's scholars, designers, and artists from all over Turkey, the Mediterranean and Europe, enhancing international networking capacity for future projects.

Key factors for success include:

The Academy's by-law is ratified by the Municipal Council. It is therefore an individual element of the municipality's institutional structure. Its role has been defined in the municipality's strategic plan; its budget is allocated annually by the Municipal Council. In case of political shifts, cultural actors, and city residents, who have embraced this new institution, are expected to support the continuity of the Academy. The ICPI has strong support among its stakeholders and it is expected that it will become an autonomous entity working in collaboration with the Academy.

Furthermore, the Academy was designed as a flexible institution with a role of initiator and supporter for the civil society and may adapt to work in the sectors where it is the most needed. Thus, the current fields of work except history may be replaced by new ones if the city becomes advanced enough in these issues.

Izmir Metropolitan Municipality was a candidate for the third "UCLG Mexico City – Culture 21 International Award" (November 2017 – May 2018). The jury for the award drew up its final report in June of 2016, and requested that the Committee on Culture promote this project as one of the good practices to be implemented through Agenda 21 for culture. 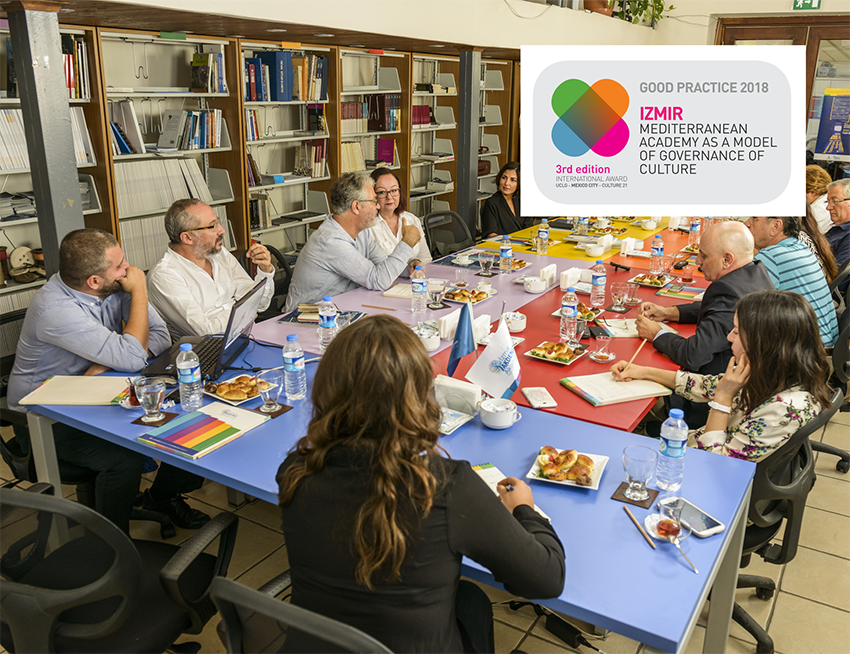