Culture: a pillar of sustainable development in the Cuenca Canton

The Cuenca Canton has a significant amount of tangible and intangible cultural heritage, from its physical pre-Columbian settlements to its social processes that weave together to form a singular and representative urban mosaic. Cuenca’s inhabitants, customs, values, ancestral knowledge, gastronomy, clothing, and its landscape are all part of its essence, which help make the city into a place that people of many nationalities can visit or call home. Cuenca is known for celebrations and festivals that have helped shape its identity as a place with a unique personality. This is manifested through multiple cultural expressions such as music, folklore, theatre, dance, religious rites and customs, myths, and legends. These factors, coupled with the level of recognition Cuenca has achieved after being declared a UNESCO World Heritage Site, have helped citizens identify with their territory and their history, while also promoting participation in safeguarding collective memory and emphasizing different parts of heritage.

The general policy framework for policies in the Cuenca Canton can be seen in its Land Management and Development Plan (PDOT), the technical and regulatory tool for overall development management and planning in the region. The task of updating the PDOT was taken on by the 2014-2019 municipal administration, which prioritized citizen participation in drafting the plan. A “Culture” component was subsequently laid out, with a policy of creating conditions that would turn culture into a core party development and prosperity.

The work plan was developed with support from throughout the municipal government including City Hall, departments, foundations, and municipal enterprises. Together neighbourhood leaders, artists, cultural managers, civil society, and experts, Agenda 21 for Culture was implemented.

This policy was approved on March 13, 2015 by the Canton Council. It was developed based on a government plan created by Mr. Marcelo Cabrera Palacios, the former mayor of Cuenca, alongside the municipal Culture Committee, chaired by Councillor Monserrath Tello Astudillo. This led a process of change that established culture as a key factor for economic development, environmental balance, social inclusion, peace, and safety.

Aside from the high number of cultural goods and services in the historic centre, one of the main actions taken to solve a previous lack of comprehensive cultural policies, proper cultural management models, and adequate infrastructure was to involve the UCLG Pilot Cities programme. Subsequently, a specific work plan was created and implemented in 2016, which includes 4 pilot measures covering 8 projects: 2030 Canton Culture Plan, Canton Culture System, the Cultural Industries Development Programme, Sacred Pre-Columbian Geography and Routes, Special Arts and Culture Zones, Cultural Indicators, Cultural Map and Registry, and Neighbourhood Improvement Programme for Cultural Action. All of these are linked to the themes of Agenda 21 for culture, Culture 21 Actions, and the Sustainable Development Goals (SDGs) such as 1.5, 2.3, 2.4, 4.4, 4.7, 5.5, 8.3, 8.9, 11.4, 12 b, 16.1, and 16 b.

International cooperation with other local governments that involve Agenda 21 for culture in their policies and projects has allowed Cuenca to be part of a platform where there is ongoing learning between cities. This uses technical visits, summits, and other meetings as a way of sharing good practices in other municipalities to adapt them for other local contexts. Together with other intermediate UCLG member cities, Cuenca has helped shift the paradigm of sustainable development to include culture as its fourth pillar. This is evidenced by the Declaration of the Continental Forum of Intermediate Latin-American Cities, held from February 28 to March 2 in Cuenca.

The main objective is to turn culture into the fourth pillar of sustainable development in the Cuenca Canton with policies that guarantee the full exercise of cultural rights, the development of knowledge, and capacity-building, which can all contribute to economic development, social inclusion, environmental balance, peace, and safety.

One of the action's plans is the creation of a cultural industries development programme, which provides training workshops in the cultural sector on financing mechanisms for cultural projects, copyright, and innovation, among others.

The allocated budget for the planned Pilot Cities programme activities was approximately $25,000 in 2016, $167,000 in 2017, and is currently $570,000 with a specialized interdisciplinary team that helps with its implementation. The Canton Council declared the period from June 2017 to June 2018 as the “Year of Culture”. To date, the total budget used is approximately $762,000, including the investment used to participate in the Pilot Cities programme.

This initiative has allowed the municipality and the entire private, public, and civil society sectors to change perceptions of culture with respect to sustainable development. In the current administration it is increasingly common for the Department of Culture to become involved in urban planning processes, informal education, social inclusion projects to build people's resilience, and peacekeeping.

Emphasis has been placed on the importance of cultural and creative industries, or the Orange Economy, in recognizing the contribution of cultural actors and their impact on creating wealth and jobs in the region.

Today, culture budgets continue to invest in education and training for consumers and producers of art and culture. This is part of a comprehensive policy that guarantees people's rights to free expression, participation, heritage, values, and identities.

The population that directly benefited was some 11,000 people between 2016 and 2017. However, the project has had an even greater impact across the canton due to multiple activities carried out by the municipality through its Department of Culture, Education, and Sport.

The first mechanism for evaluation that was used to assess municipal policy with respect to culture was carried out during the first phase of the Pilot Cities programme in January 2016. This activity was based on the Culture 21: Actions document. It included the participation of Municipal Council staff, local universities, chambers of commerce and industries, other public and private institutions, as well as various representatives from civil society, organizations, groups, cultural centres, and citizens. The second evaluation was scheduled for June 2018, and included the creation of Cuenca Canton Observatory on Culture with indicators based on Agenda 21 for culture and Culture 21: Actions.

The declaration of the “Year of Culture” and the coordination of the entire Municipal Council in implementing the work plan are both signs of the Administration's commitment. This is also reflected in the increased municipal budget for culture, investment in international programmes such as Pilot Cities, the designation of a specialized interdisciplinary team to implement the work plan, and the creation and institutionalization of cultural projects such as the “Cultural Industries Development Programme”, “Governance of Culture Project”, and the “Culture, Equity, and Social Inclusion Project”, among others, within the Annual Operating Plan of the Municipal Department of Culture.

To ensure that this policy continues, the 2030 Canton Strategic Culture Plan was initially developed to be approved by the Canton Council through an ordinance that ensures governments’ compliance until 2030 regardless of political mandates. For that purpose, a framework document was written that optimized the city’s resource management in executing cultural projects. This plan was scheduled to be approved in 2018 after a participatory process.

The first key factor for the success of this policy is the commitment of the current administration to turn culture into a driver of sustainable development in the Cuenca Canton.

Cuenca was a candidate for the third “UCLG Mexico City – Culture 21 International Award” (November 2017 - May 2018). The jury for the award drew up its final report in June of 2018, and requested that the UCLG Committee on Culture promote this project as one of the good practices implemented under Agenda 21 for culture.

This article was written by Andrea Malquin Maura, Coordinator for the Pilot Cities Programme at the Department of Culture, Education, and Sport in the Municipality of Cuenca, Ecuador, Azuay. 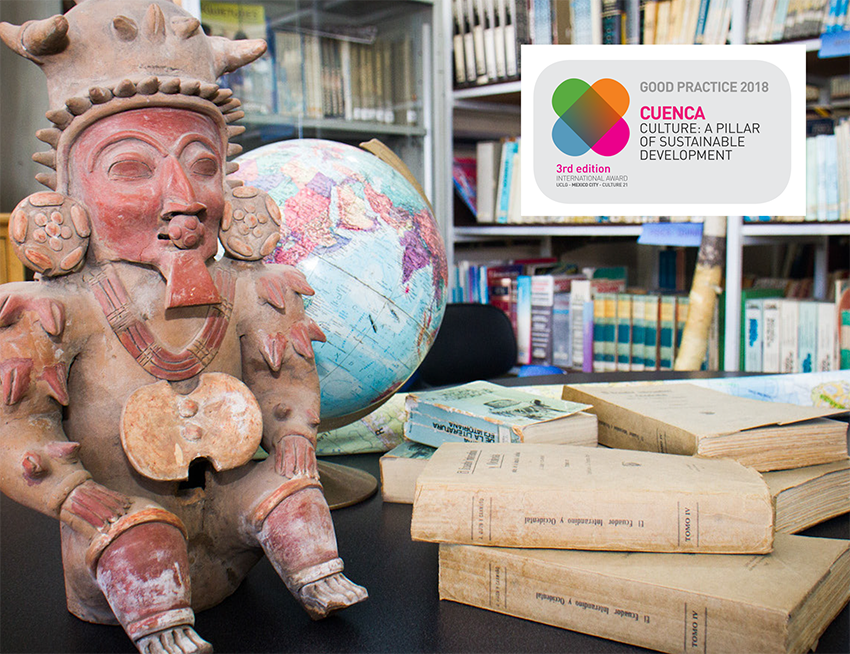