The city of Papantla is located north of the State of Veracruz, near the “El Tajín” archaeological site. It is also where the Totonac language is spoken It is recognized as a Magical Town thanks to its symbolic and cultural elements, as well as its legends, traditions, history, momentous events, and everyday life, which itself is founded on practices, ancestral knowledge, and local customs. Furthermore, it is the source of the ancient flying men ritual, listed as a UNESCO Cultural Intangible Heritage ceremony.

The project is overseen by the “Sustainable Regional Tourism Development and Magical Cities Program” (PRODERMAGICO).

The city’s tourism policy is in line with Agenda 21 for culture insofar as it establishes a dialogue with inclusive and intercultural cultural policies. Tourism pays special attention to the society’s most vulnerable populations, particularly women and youth, and aims to more broadly involve and engage residents in cultural practices and Totonac culture. The city has also committed to training people in sustainable cultural tourism as an opportunity for them to participate in, and enrich the cultural life of Papantla.

It emphasizes the importance of sustainable cultural tourism by putting the spotligh on how its cultural attractions, historic centre, and gastronomy benefit the general population. The initiative centres on the Papantla flyers ritual ceremony, the El Tajín archaeological area, the centre for indigenous arts, and the importance of locally produced vanilla.

Papantla contributes to preserving and strengthening Totonac culture in accordance with the UNESCO Convention on the Protection and Promotion of the Diversity of Cultural Expressions. With respect to the creative economy, productions, content, and Totonac narratives lend a unique quality to the city and create significant economic benefit. Furthermore, in keeping with 2030 Agenda the aim is to specifically revitalize cultural and creative communities in order to reduce inequality and gaps in the Indigenous population throughout the State of Veracruz. Totonac cultural practices convey forms of expression, creativity, and identity building, which are all rooted in human dignity and embody an approach to sustainable development that is human-centred.

The goals are to promote sustainable cultural tourism and its impact on local development, as well as to position Totonac culture as a means of attracting tourists with its dances, flyers, the El Tajín archaeological site, the Centre for Indigenous Arts, the historic centre, gastronomy, and locally grown vanilla.

The population of Papantla and surrounding areas, as well as the tourists that visit.

Some positive factors include the increasing professionalization of local cultural actors, re-establishing the value of tangible and intangible heritage, and the cross-cutting effects granted to sustainability, the Totonac language, the world views of indigenous peoples, and local norms or customs.

Papantla has had to learn to manage a tourism project based on local development, cultural rights, institutional governance, and sustainability. At the same time it must uphold its designation as a Magic Town, thereby demonstrating itself as a significant biocultural hub, with the subsequent economic benefits and status.

Impact on culture and cultural stakeholders

The project has created a better quality of life for the local population by putting the tours and the charm Totonac culture at the centre of its strategy. This has helped make culture the core of one of the most important local public policies in Mexico.

Another example of its positive impact is the increasing professionalization of its cultural actors, the subsequent reestablishing the value of tangible and intangible heritage, and nature as a fundamental part of Totonac cosmogony. Additionally, it facilitates intercultural interactions between Indigenous populations (Totonac peoples), Afro-Mexican and multiracial persons, as well as visiting foreigners.

Impact on the region

The Magical Towns of Mexico have maintained a connection with Papantla, and are inspired by the cultural perspective that this municipality has adopted.

The program has had significant cultural, social, and economic impacts, which is particularly apparent in the positive tourism around Totonac culture and, with it, the increasing number of hospitality and restaurant establishments. Vanilla is also essential for everyday life in Papantla. Totonac craftsmanship is, and will continue to be, a platform for generating business and respect from locals and foreigners alike.

The evaluation of the project quantifies the city’s progress and establishes a survey profile and grades for the activities with the aim of improving the project’s implementation.

The following were the essential factors that led to Papantla being added to the List of Magical Towns:

Other magical towns have maintained a connection with Papantla, and are inspired by the cultural perspective that this municipality has adopted.

The program’s ongoing work is reported every two months with evaluations by the federal and state governments.

Papantla de Olarte Veracruz was a candidate for the fourth UCLG Mexico City – Culture 21 International Award (November 2019 – May 2020). The jury for the award drew up its final report in June of 2020, and requested that the UCLG Committee on Culture promote this project as one of the good practices implemented under Agenda 21 for culture.

This article was written by Mr. Pedro Reynaldo González Carranza, Head of the Department of Municipal Tourism for Papantla Veracruz, Mexico, and Dr. Ascención Sarmiento Santiago, Academic Researcher at the Intercultural Universidad Veracruzana. 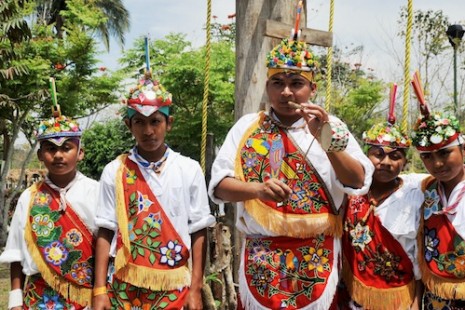