Busan is South Korea’s second largest city and busiest port. Kangkangee Village, located in Yeongdo-gu, or Yeongdo District of Busan Metropolitan City, is situated across Jagalchi Market, an extensive wholesale fish market, and near a gateway to Yeongdodaegyo Bridge, both of which are famous local landmarks.

Korea’s first motorized ship was created in Kangkangee Village in the late 19th century. The village flourished with ship-repairing business up until the 1980s, and today, visitors can find remnants of Korea’s industrialization, such as eight repair shipyards, vessel parts companies, and other shipbuilding-related firms. The long-term economic recession and decline of the shipbuilding industry caused rapid depopulation and accelerated the deterioration of the village. The final blow came in during the 1997 Asian financial crisis after which basic infrastructure facilities such as banks, medical clinics and a police station stopped or moved their operation, accelerating the degeneration of the neighbourhood: dilapidated houses accounted for 71.9% of the buildings in the area, population influx decreased by 47.7% and the population declined five years in a row.

Busan metropolitan government has been relying on cultural content as an important means to facilitate urban regeneration and stimulate the creative economy, providing citizens with public support to foster their voluntary participation in cultural activities, and developing various kinds of cultural content to boost local tourism.

In 2015, the city carried out the Imagination Arts Village Initiative, a competition scheme whose winner would be awarded the fund to carry out an urban regeneration project by means of arts and culture. Kangkangee Village, whose name originates from kangkang, the sound of a hammer hitting the rusty surface of an old ship, won the bid, thanks to its rich historical and cultural heritage sites that exhibited Busan’s identity of a great port city.

The specific goals of the project include:

The project’s preparatory phase included the establishment of the village information centre and the ship-repair museum, where guests can engage in hands-on learning programs on the restoration of a damaged ship. To house this museum, the city government bought a building from the early 1900s built in Japanese colonial architectural style. The renovation work of the building is under way to recreate the colonial atmosphere while preserving historical features.

A series of actions have been carried out along the three actions plans of the regeneration project: Sea, regeneration and community.

The Yeongdo Ferry Restoration Project, expected to be completed in 2018 (budget of EUR 120 000), includes the following components:

The Public Art Project consists in integrating landmark objects, art benches garden alleys, as well as sound, light, kinetic and painting urban installations (EUR 450 000 budget) into the village environment. In total, 88 pieces of artwork created by 29 artists were installed throughout the village.

The Village Museum project (EUR 540 000 budget) also contributed to surveying and archiving the intangible maritime lifestyles of citizens, as well as to set up cultural exchange programs with foreign cities, and to develop a guided tour of the village. Historical content on the village and shipbuilding industry was recorded, exhibited, and reproduced in various formats (books, videos, graphic novels, and musical pieces).

Progressively, as Kangkangee arts village is gaining public attention from home and abroad, the city government is watching out for a potential increase in land values and rents, which could potentially force current, established residents and business to relocate.

The Cultural Sarangbang Program is an on-going programme aimed at providing educational programs, creating workshop space for artists and establishing a venue for hands-on learning. Residents participate in the maintaining and cleaning of the physical living environment on one hand, and on the other hand through art performances, such as music, dancing or writing.

In addition, through the Kangkangee Creative Project, a website and brand identity for the village were built and developed by the residents themselves, as well as a series of souvenir items, and a village newspaper was published (EUR 120 000 budget).

The whole project was implemented under the responsibility of a Task Force Team, with its own secretariat (EUR 320 000 budget). The Task Force includes civic organizations such as “Creative Plan b”, an artists' cooperative, and the Yeongdo Cultural Center. Two members of the team also participate in round-table talks with the residents’ association, the government, and a group of experts from the private sector, to evaluate the implementation process and make appropriate recommendations.

“Creative Plan b” also took part in the planning phase of the KAV Project. After the Project was launched, Creative Plan b kept conducting research, collecting relevant data, and running educational programs designed for residents. In parallel, the Yeongdo Cultural Center acts as a link to enhance communication among various governmental organizations, civil society organizations, and residents.

Other partners from governmental entities include Busan Metropolitan Government, which provides general administrative support and financial resources for the whole project (total budget of EUR 2 800 000), and pursues detailed action plans in cooperation with participating organizations and Yeongdo-gu Office. In addition, the district government of Yeongdo-gu is responsible for the actual implementation,  including purchasing land and buildings and renovating the purchased properties.

To prevent the possible negative effects of gentrification in the village, the government has employed proactive measures:

The project innovated the way in which artists and citizens participate in a public project: broadened scope of creative subject matters; ongoing interaction; bring a fresh perspective on the importance and worth of the city though various creative arts activities.

The KAV Project is a breakthrough initiative for local governments that strive to deliver better public services. In the past, previous municipal policies regarding culture were top-down decision-making processes, including administrative support for artists and performers, governmental support limited to individual art projects, and policies to help citizens gain greater access to arts and cultural events by providing them with gift vouchers to be used at museums, theaters or concert halls.

On the contrary, the Kangkangee Arts Village Project adopted a system of good governance in which artists, civil society organisations and government worked in equal partnership.

Throughout this project, the importance of artists’ role in urban planning was highlighted, which made government and artists treat each other as partners on equal terms: intangible regeneration of the village, i.e. performances, exhibitions, and archiving, was mainly taken on by the private organizations. In this sense, the KAV Project was the first successful case of public-private governance in South Korea wherein both sectors forged equal partnership.

In addition, the project was a turning point in the collection and preservation of tangible and intangible assets concerning industrial heritage and maritime lifestyle in Busan.

The village, once labelled as a disintegrated industrial area, reinvented itself as a uniquely valuable place to showcase the true identity of Busan. Local residents are both the main beneficiaries and the main actors of the project. A resident association was originally founded in the 1950s, and later re-organized in the 1980s to provide support for social service organizations. It was involved in the early phase of the KAV Project, and in 2017, they participated in the Cultural Sarangbang Program, which consisted in providing various arts and cultural lessons at a community center.

Last year, while Busan Metropolitan Government evaluated the use of collaborative municipal governance in city-sponsored projects, the Kangkangee Arts Village Project received a grade S, corresponding to highest quality performance. The evaluation was based on several indicators:

The government, artists, and residents have been making great efforts to improve the continuity and sustainability of the Kangkangee Arts Village Project, in particular by establishing a dedicated Urban Regeneration Task Force Team, which ensures constant monitoring, supervision, and support.

The Task Force has been working hard to attract governmental funding and corporate sponsorship so as to preserve installed artworks and continuously provide citizens with arts and cultural programs. In 2018, the Task Force secured funding from the Ministry of Culture, Sports and Tourism in addition to the already allotted budget.

Busan was a candidate for the third "UCLG Mexico City – Culture 21 International Award" (November 2017 – May 2018). The jury for the award drew up its final report in June of 2016, and requested that the Committee on Culture promote this project as one of the good practices to be implemented through Agenda 21 for culture. 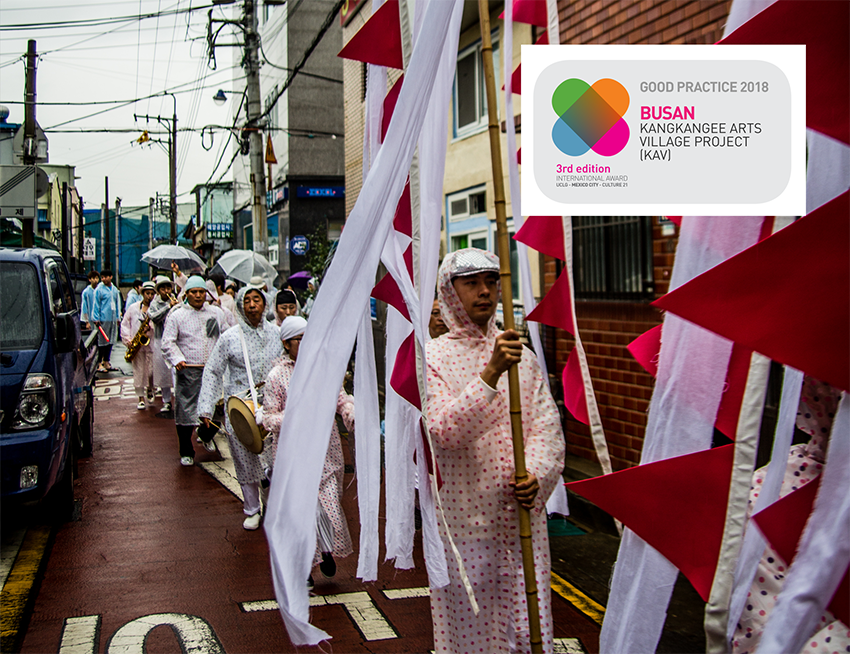