Culture as part of the strategic development of Cowansville

Cowansville is a town of 14,354 people and an area of over 48 square kilometres south of Quebec, Canada. It is surrounded by a beautiful natural environment with Lake Davignon and 22 parks over 56 hectares. This municipality is one of the economic and industrial centres of the Brome-Missisquoi region and offers all the services of a large urban centre. Since 1980, the town has experienced a virtually non-existent level of population growth and significant job losses in the textile industry, transforming it into a transit city. Because of its location between two major recreation areas, it was crucial for Cowansville to differentiate itself from neighbouring municipalities. This would subsequently revitalise its vibrancy and attractiveness while reorienting the town towards a sustainable development strategy.

In an era of low population growth and deindustrialisation, the culture of Cowansville emerged as a strategic repositioning tool capable of ensuring sustainable development and connecting citizens to their municipality.

In 2013 the town adopted its first strategic plan, a new cultural policy in 2015, actions aimed at promoting cultural democracy and meeting the town's development needs, as well as organising citizen workshops such as Cultural Meetings and Cultural Clinics. A number of cultural activities have been developed, the heritage route has been renewed, dissemination for the performing arts has been strengthened, and a dozen cultural events have been set up.

Over the years, the town of Cowansville has embarked on a significant cultural shift to showcase its rich heritage and develop a sense of pride and belonging among its citizens.

Several secondary objectives have been developed including:

Since its launch in 2013, several initiatives have been initiated as part of Cowansville's cultural policy:

As part of its cultural policy, the Town continuously works alongside its citizens and implements more integrated projects. Generally, culture is increasingly taken into account during policy design, such as in sustainable development, creating links between services or with the redevelopment of the Cowansville public square.

Impact on Culture and Cultural Stakeholders in the Town

With ten times more cultural projects and activities, the role of cultural actors in providing services has increased and new functions have, such as cultural mediation. Collaborations and relationships between organisations, the town, and artists have increased. Project leaders feel more attentive and they have found the necessary support from many collaborators, particularly from the town's department of culture.

Gradually, the pool of enthusiastic supporters for culture is growing. More and more, it is citizens who take initiative in organising activities instead of waiting for the town to do so. They are also more likely to participate in town consultations.

The town produces an annual accountability report that is made public in mid-April, to monitor the development of cultural policy objectives, such as the Strategic Plan and Action Plan. The cultural development committee is in charge of this process, under the joint management of the culture department. For two years, the latter has also been producing a qualitative report with statistics on attendance and the costs of activities.

An anonymous suggestion box is available to the public at the library. Citizens participate in decision-making by giving their opinion through various public and social consultations to ensure that cultural activities meet their needs.

To ensure the success of its actions, the town organises public consultations on the services it offers to citizens.

It is essential to have unwavering support from elected officials and municipal services. Strategic planning and cultural policy with a clear mission and achievable goals are vital tools for both the municipal team and citizens in striving to implement such change.

Clearly identifying the needs of upstream users, developing a flexible action plan, provides citizen legitimacy to activities, encouraging participation, and facilitating implementation are all important, too. Openness to external ideas and various communication tools are also factors for success. The clarity and attractiveness of the projects depend on their good structure, and an ability to make stakeholders with different characteristics, willingness, and motivations all work together.

New measures were launched, such as the cultural mediation fund proposed at the cultural clinic in January 2017. Six projects are currently under way. The town's new strategic plan, adopted in April 2019, incorporated culture as the 4th pillar of sustainable development. While considering the new proposals, an essential factor is to ensure the sustainability of the cultural activities put in place during over the last five years, as well as to support financing for partner organisations. The opening of a Medialab has been planned. Finally, the town will apply for the UCLG Pilot City programme to promote art as a vector for social change by focusing on its related economic and commercial aspects.

The Town of Cowansville was a candidate for the third annual "UCLG Mexico City – Culture 21 International Award" (November 2017 - May 2018). The jury for the award drew up its final report in June of 2016, and requested that the UCLG Committee on Culture highlight this project as a good practice in the implementation of Agenda 21 for culture, and as a special mention for the third awarding of the Prize. 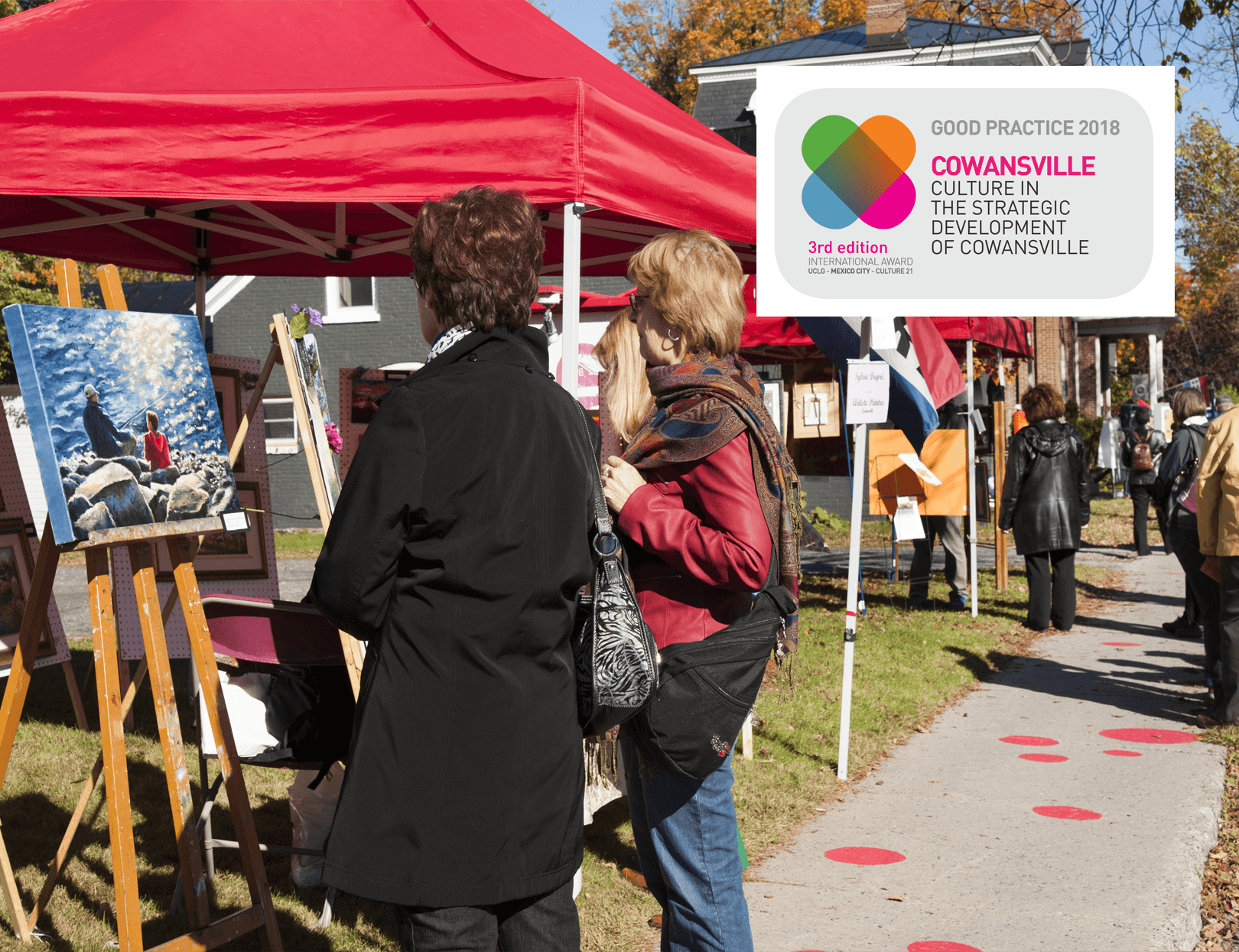