Abitibi-Témiscamingue is located in the western part of the province of Quebec, Canada. It covers 65,000 square kilometres and has 145,000 inhabitants. It is comprised of five regional county municipality (RCMs) which include some medium-sized towns and rural communities (over one-third of the population). The region is recognised for being a resource region because of its history of being intricately connected with the use of natural resources. Its population has fluctuated according to markets of the mining and forestry industries which dominate the area. As a result, retaining its workforce has been a major challenge.

Abitibi-Témiscamingue is a young region that is far from cultural centres. Its cultural vitality is thus dependent upon its municipalities. Artists who have chosen to live there have found it difficult to find employment and are faced with the need to find a second low-income job. Despite this, the buzzing artistic community has shown the effect culture can have on the population. For Abitibi-Témiscamingue, such cultural vitality is an opportunity to improve cultural tourism.

CULTURAT is a dialogue among municipalities and sectors that allows for the de-compartmentalisation of rural and Algonquin communities. This leads to the democratisation of development tools by engaging different sectors, supporting projects and citizen participation throughout the region, creating networks between sectors and spurring transformation of the area, as well as promoting the Anicinabe Indigenous culture.

CULTURAT is a mobilization process aimed at making identity, the arts, and culture instrumental parts of development in Abitibi-Témiscamingue.

CULTURAT brings together 52 municipalities and 7 Indigenous communities. It addresses the lack of cultural policies in rural municipalities that do not have them, while also striving to unite them in a regional movement, which promotes the arts and culture as a sustainable practice. These municipalities have demonstrated a clear commitment to the quality of life of their citizens. By signing the charter, they have committed to concrete cultural development actions connected to the Agenda 21 goals.

CULTURAT empowers municipalities with cultural policies that can be applied in a coherent way. As this is an approach that involves support, facilitation, and education, it is also a response to the absence of public policy. It is based specifically upon Agenda 21 for culture in Quebec and considers culture to be a fundamental right, while guaranteeing access to the knowledge necessary to exercise other rights, freedoms, and responsibilities. It acts as both a factor for social cohesion and economic leverage, contributing to the quality of the built environment and residents' quality of life. The result of these is the project's large contribution to equity and social inclusion, in addition to being a catalyst for creativity.

The approach is a part of a beautification project through art and horticulture. It also involves rapprochement with Indigenous communities and cultural rights, emphasising local products from a sustainable perspective, promoting culture in education authorities, raising awareness of culture and arts in the business community, cultural promotion in urban planning and public spaces, sharing information and knowledge, inviting participation, and mobilising all sectors around arts and culture in a sustainable way by creating coordination committees. The goal is to create a synergy between culture and other sectors so that culture can become an important factor in tourism, or social and economic development. Furthermore, the aim is to increase outside appeal and internal commitment to the region, cultural diversity, and residents’ quality of life.

CULTURAT is a mobilisation process aimed at making identity, the arts, and culture instrumental parts of development in Abitibi-Témiscamingue. It also seeks to transform the territory in order to improve quality of life and make it more attractive to residents and visitors alike. Its specific objectives are:

The project has helped to increase synergy, empowerment, and dialogue throughout the territory. This will ensure that communities have better management over their cultural resources, and acts in response to isolation and the absence of cultural policies.

CULTURAT furthers the development of a joint strategy between municipalities that engages many sectors of society, while integrating arts and culture into the different spheres of life. This approach is directed at municipalities, Algonquin communities, companies, organisations, citizens, and many others. Since 2009, the following actions have been carried out:

All of the signatory territories cooperate within the framework of the project in order to encourage adherence by partners. By adhering to the charter, they strive to carry out actions in line with the

bjectives of this approach, and, in several cases, shall advance funds to carry out specific projects. The Ministry of Culture and Communications participates financially in this initiative, and the Ministry of Tourism has agreed to prioritise the development of cultural tourism in Abitibi-Témiscamingue in accordance with the 2012-2015 Regional Partnership Tourism Agreement.

The population of Abitibi-Témiscamingue is the first group that will see the benefits of this project. Improving their quality of life, strengthening roots and attachment to the region, and improved knowledge of the territory, heritage, and history all reinforce identity. The cultural sphere and the tourism industry will also benefit from this thanks to new funding, new networks, and emphasis of these areas among all regional stakeholders. Arts and culture will therefore comprise a base for highlighting Anicinabe identity in order to combat both negative views of this identity experienced by youth, and its community social issues.

The project has helped to increase synergy, empowerment, and dialogue throughout the territory. This will ensure that communities have better management over their cultural resources, and acts in response to isolation and the absence of cultural policies. Improving quality of life directly influences the region's attractiveness and ability to retain its citizens, while avoiding the closure of regional and municipal authorities.

CULTURAT contributes directly to the professionalisation of artists. It also develops opportunities to establish a better understanding of the cultural sector, while also developing the integration of arts and culture into all spheres of activity. Over a hundred projects were carried out along with professional artists.

CULTURAT actively participates in improving quality of life for citizens. Its intra-regional promotion gives residents an extensive overview of the territory, and a better understanding of its cultural wealth, thereby increasing their sense of belonging and pride.

CULTURAT furthers the development of a joint strategy between municipalities that engages many sectors of society, while integrating arts and culture into different spheres of life.

A partnership was established between the Abitibi-Témiscamingue Tourism department and the University of Quebec in Abitibi-Témiscamingue (UQAT) to scientifically document the process and facilitate analysis and improvement. A professional firm has been requested to carry out strategic planning for continuity in the approach.

CULTURAT was conceived from a sustainable development perspective. Good practices such as cultural integration must become a "way of thinking" in development. Established links and networks are long-term responses, and such tools remain open and accessible. In addition to pursuing these initiatives, CULTURAT's next actions will focus on turning the region's citizens into ambassadors, and thus lead them to a greater consumption of tourism and cultural products.

The Abitibi-Témiscamingue region was a candidate for the second "UCLG Mexico City – Culture 21 International Award" (January - May of 2016). The jury for the award drew up its final report in June of 2016, and requested that the Committee on Culture promote this project as one of the good practices to be implemented through Agenda 21 for culture.

This article was written by Sonia Demontigny, Project coordinator for the CULTURAT Project, Abitibi-Témiscamingue, Quebec, Canada. 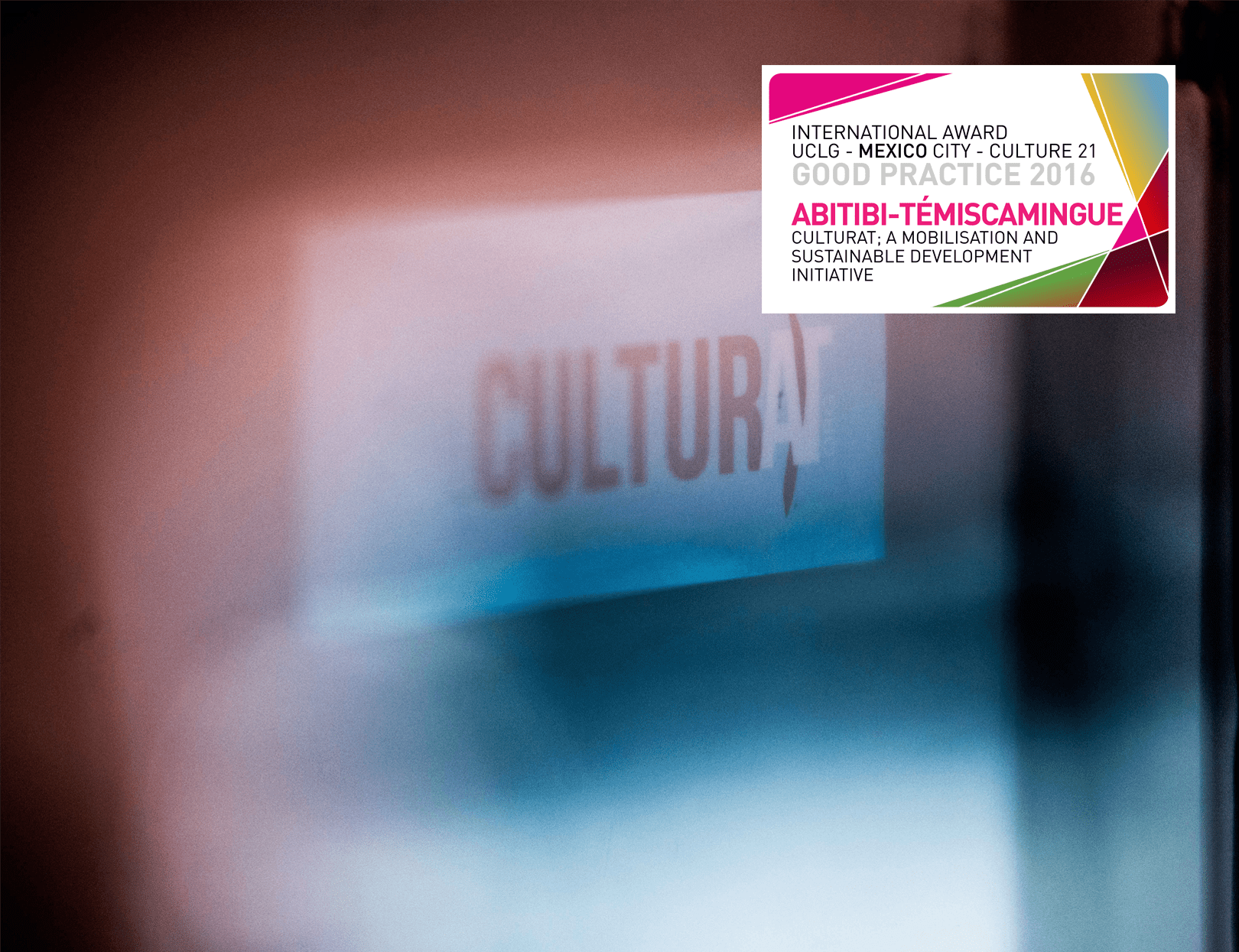