The Santiago Metropolitan Region is home to 7,112,808 people, which is just less than half the population of Chile. Santiago is made up of 52 communes, 18 of which are rural areas, and these are all grouped within 6 provinces.

Over the last 50 years, the region has undergone a dynamic processes of urban expansion and population growth, reinforcing its status as a political, administrative, economic, and cultural centre for the country. However, it is the most unequal region, with a GINI coefficient of 0.498, the highest in
Chile.

As a capital region it is the main hub for events and cultural infrastructure, yet it simultaneously has the largest issues around access to culture. The region is also one of great cultural diversity, weaving together urban and rural, modernity and tradition, and even development and instability. The latter is due to a high level of social segregation, which is the main contributing factor to inequality in cultural consumption and access.

This is an historic alliance in the field of cultural policy in Chile.

The Santiago Metropolitan Region and culture

The Metropolitan Region established a five-year programme with objectives, resolutions, and strategies within the general framework of cultural policy led by the National Arts and Culture Council. A policy was established based on three core principles: promotion of the arts, citizen participation, and cultural heritage, each with its own objectives, resolutions, and strategies. Each pillar is centred on the importance of establishing strategic alliances, differentiated funding, knowledge transfer, and support in the concrete implementation of actions. Santiago is Mine was the most important response to this policy.

This an historic alliance in the field of cultural policy. Never before has a regional government in Chile invested so heavily in a cultural programme. The Santiago is Mine project originated from the CNCA RM in its attempt to service such a large, diverse, and complex region given its economic and sociocultural makeup. A project outline was developed to facilitate the injection of resources required for having a real impact on the region. The plan outlined actions centred on three core concepts: training, partnerships, and identity.

Santiago is Mine faced a regional problem where access to, and participation in, culture were two factors in tension with one another. The most physically and socio-economically isolated communities were excluded from cultural life. Resources and active participation were thus refocused on a process of decentralization. This involved cultural actors from the communes in arts training actions developed jointly and in a participatory way.

Santiago is Mine therefore transcends into global agendas such as the 2030 Agenda, SDGs, and Agenda 21 for culture. The main goals of the programme are to address existing inequality around access and citizen participation in arts and culture experiences (Goal 10). It aims to emphasize the importance of culture in strengthening social cohesion, protecting and valuing heritage, and making public spaces into places for meeting and developing the social fabric (Goal 11). Finally, "Partnerships for the Goals" (Goal 17) is evident not only because the programme itself represents an historic example of institutional partnership, but also because specific actions seek to establish the concept of cooperation as a central element both internationally (Ille de France) and locally (Network of Cultural Centres).

With respect to Agenda 21 for culture, the current project aims to: establish culture as a fundamental pillar of human development; promote access and participation in a more democratic culture, support cultural diversity by recognizing the identity and heritage of different regions. Furthermore, public space will be valued through concrete artistic actions by groups committed to the territories. This will be coordinated alongside local governments who shall be present in the development, management, and exchange of such actions.

The main goal is to train public cultural managers and the city's community to promote cultural engagement and consumption, with actions geared towards training audiences. The project also must see to the creation of association networks that ensure equitable, quality access to cultural life, establishing visibility and value for cultural identity elements in the region.

The main beneficiaries of this project include the populations of the 52 communes in the Metropolitan Region, particularly the 3 poorest groups with a monthly income of less than $337 USD, which is 68% of the regions inhabitants. Finally, the project also created jobs for some 2,393 culture workers and the culture teams from different communes, cultural foundations, and public institutions associated with the programme.

Theatre of Silence: Company that toured with the street performance of "Doctor Dapertutto" around 9 communes in the Metropolitan Region, and worked with amateur actors with no theatrical experience; visited highly vulnerable communes that are isolated from cultural life.

Santiago is Carnival: brought together the 52 communes of the Metropolitan Region, each one worked for 3 months in workshops that recovered elements of identity and heritage for each area; constructed a float to drive down Alameda, the main avenue in the city, during a massive parade accompanied by carnival groups, which saw a high level of participation and attendance.

Each commune worked for 3 months in workshops that recovered elements of identity and heritage for each area.

Metropolitan Festival: arts programmes within the Network of Cultural Centres Mediation projects were carried out with groups selected by calls for tender, and local artists from the 18 respective communes 113 arts groups participated, 550 people during the days of mediation, and 25,541 attendees at the events

Cultural Management Training: 24 sessions were carried out, each with 4 modules over 20 hours, which certified 637 local managers in the 52 communes

Tour Plan: Working partnerships among the 5 communes with the highest income and cultural consumption, a video mapping out the tour project was made, reflecting on the city, its history, and contemporary challenges from an immigrants perspective and experience

Artist Residencies: 11 arts groups developed a 6-month-long project in 11 neighbourhoods with significant social complexity First 3 months were used for assessment, and the last 3 for carrying out the project and residencies Together with the community, theatre performances, art installations, and a community TV channel were set up. These initiatives seek to emphasize the value of local historical memory, revitalize public spaces, and deepen the social fabric.

The main obstacle was the large level of diversity in the 52 communes. This diversity was evident through differences in the level of industrialization, level of modernity throughout the population, distance to urban centres, geographic isolation, socioeconomic vulnerability etc.

The programme managed to implement concrete actions in each of the 52 communes, home to more than 7 million inhabitants, and the total participation of more than 180,800 people.

Impacts on Local Government, Agents, and the City

By implementing an intersectoral approach, Santiago is Mine became the first cultural project to have been funded by almost 5 million dollars

The Central Role of Culture

The project incorporated a comprehensive vision of the role of public investment in culture, recognizing its importance in a region's development and social transformation. This helps reposition cultural arts in public policies.

Using an intersectorial approach in a cultural project was unprecedented in the history of joint work between a regional government and a regional department of culture.

The programme increased investment from the CNCA RM by 59% for carrying out programmes, which set a precedent for public investment in culture.

The programme devoted 4,793 hours exclusively to training and education; it hosted 173 arts events in which 265 national, international, and local groups participated, bringing together 180,844 people both in training sessions and as audience members. It worked with the 52 communes of the region, using a collaborative approach and effective participation in outlining programmes and content.

This involved the preparation and implementation of 8 quantitative questionnaires (Likert scale) to contrast the perception of participants against various aspects of the activities (sample: 1186 cases).

The main conclusions included: generally high scores, especially for the ability to repeat activities that are evaluated annually, and changes in perceptions according to the commune that participated.

The programme's design was based on two fundamental parts that are also directly linked: The first is that of its duration over two years, and the second is that the most popular activities are held annually. These conditions contributed to the project's successful implementation and its perception:

Over the last two years, consistent and substantial participation helped establish a programme that, today, is recognized throughout the municipal government for its importance to the cultural sphere.

The second version of the project is now called "Santiago for All", was presented and approved by the Metropolitan Regional Government at the end of 2018. It was launched in 2019 and will last 3 years through the end of 2021. The updated project has increased not only how long it will run, but also a considerable increase in budget, activities, and infrastructure used for the programme.

Taken together, the success of the first project, and the start of a more robust second stage are signs that the programme will set a new milestone, and become a part of public policy.

Santiago was a candidate for the third "UCLG Mexico City – Culture 21 International Award" (November 2017 - May of 2018). The jury for the award drew up its final report in June of 2016, and requested that the UCLG Committee on Culture promote this project as one of the good practices to be included under Agenda 21 for culture.

This article was written by Nicolás del Real Floresco, Coordinator for the Santiago is Mine Programme, Ministry of Cultures, Arts, and Heritage, Santiago, Chile. 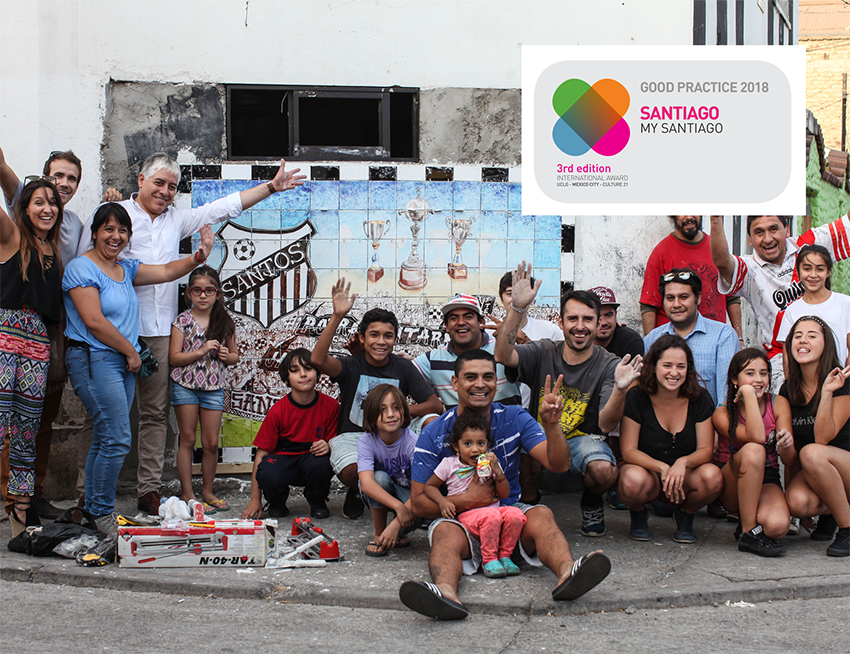