A CITY OF VILLAGES
Dublin is the capital of Ireland, and accounts for 39% of the national urban population: 553,165 within the Council’s remit. The Greater Dublin area comprises an overall population of 1.35M, 15% of which are immigrants. Since the 1990s, it has undergone population growth, both in number and in ethnic diversity, faced economic challenges, and has modernised.

A decade-long economic downturn, following 15 years of growth, created particular challenges for the city. Today, still 43% of households are at risk of poverty and 7% within the poverty rate. Dublin has seen much improved transport links over the last decade, but it remains a city of villages, where trans-local mobility is mainly defined by employment, education or health services.

Dublin’s cultural infrastructure is its people. Rooted in oral traditions, cultural life is deeply and personally felt, and experienced close to home. This UNESCO City of Literature is home to 182 languages and starting to explore its linguistic and intercultural diversity; alongside refreshing use of the Irish language.

FINDING THE CITY’S CULTURAL VOICE
Dublin’s cultural framework has been influenced by the national agenda. The largest city by far in a small country and home to much of the cultural infrastructure, national priorities have a major impact on the local approach to culture. Dublin’s tenure as European Capital of Culture 1991 changed that, and the city began to forge a cultural path, looking to address urban cultural issues not experienced elsewhere in Ireland.

In 2015, Dublin City Council entered the European Capital of Culture competition for a second time. While unsuccessful, the city was motivated and energized by the tangible civic engagement and energy generated in the bid consultation. It also recognized the potential benefits of a more culturally-active citizenry and wanted to build on the momentum.

Citizen-led cultural experiences are at the heart of every action. Dublin's Culture Connects has created a cultural ecosystem in response to the voices telling what culture means to them and how they wish to pursue an active cultural like within the city.

In late 2015, the City Council developed a cultural strategy (2016-2021) that acknowledged the impact of culture on all aspects, including the economy, education, tourism, community and civic life. The Cultural Strategy focuses on:

Established by Dublin City Council in 2016 as a pilot, Dublin’s Culture Connects was an active experiment in the Agenda 21 for culture and UN 2030 Agenda’s SDGs. The Cultural Strategy and the City Development Plan enshrine as a guiding principle the relationship between citizenship, culture and sustainable development. The inclusion of culture as a core development objective for the first time across all actions of the Council’s work denotes a subtle shift recognising its central role. In March 2018, the Council formalised this structure through the creation of Dublin City Council Culture Company to run cultural initiatives and buildings across the city for the Council and the people of Dublin.

Citizen-led cultural experiences are at the heart of every action. Dublin City Council Culture Company continues to create a cultural ecosystem in response to the voices telling what culture means to them and how they wish to pursue an active cultural life within the city. Universal access for citizens and community participation in all programmes is ensured through pro-active engagement and outreach, facilitating groups, identifying barriers and supporting additional requirements for participation, and all activities are financially supported directly by Dublin City Council to ensure equality of access and social inclusion.

In some instances, creating first-time cultural opportunities for communities who’ve not previously participated in cultural activities fundamentally contributes to the formation of a sustainable cultural ecosystem. Although this path may be a little crooked and unsteady, all that is required is patience and a helping hand.

Dublin City Council Culture Company employs culture to connect citizens to the city and to each other, with the aim of benefitting both the people and the place. This aim is underpinned by our values:

These main actions were implemented from 2016 - mid 2019 by the original pilot, Dublin’s Culture Connects and subsequently the newly established Dublin City Council Culture Company. More programmes and cultural buildings will increase the company portfolio based on the same holistic approach, and a new five-year company strategy will be launched in September 2019.

Tea & Chats - Everything starts with a Cup of Tea.

Tea & Chats is the starting point for all our programmes, allowing us to connect with people, find out what is going on for them locally in their place, community and in their lives.

This process uses easily accessible language, is not outcome led, and happens at the time and in the place where people are already gathered. Our approach is constantly evolving with experience and the process is never complete. Citizen consultation is the foundation on which Dublin City Council Culture Company is formed, and engagement actions are continuous.

In late 2015, the city council developed a cultural strategy (2016-2021) that acknowledged the impact of culture on all aspects, including the economy, education, tourism, community and civic life.

The initial idea for this was to experiment on one of the ‘crowd-sourced’ cultural programmes proposed in the Bid. The National Neighbourhood aims at partnering communities with the National Cultural Institutions and cultural sections within the municipal culture department. We build cultural projects in community settings. By connecting artists, groups and villages with libraries, museums and creative places, together we are creating, connecting and exploring across Dublin city.

The process leads the collaborations between communities and artists. The focus on the process over any outputs supports artistic freedom and excellence and the continued relevance to the theme as had arisen during Tea&Chats. Steady building of trust between the community and the artist and responding to learnings they’ve had along the way allows for deeper personal resonance and ownership by the communities.

The National Neighbourhood is a rare opportunity to build community driven collaborative projects, allowing the open process to determine the collaborative journey.

We created Culture Club in response to regular citywide mentions by citizens during Tea&Chats that cultural venues ‘are not for the likes of me’, or other barriers of entry.

Dublin’s Culture Connects piloted a simple idea, with the National Museum of Ireland, of connecting citizens to Dublin’s national cultural institutions and other cultural venues to foster cultural curiosity and courage for a strengthened cultural life. We match people with a tailor-made tours given by a curator or expert, and follow the tour with a ‘Tea&Chat’ to share their thoughts. It is this specific personal invitation, hosting and facilitation which creates this pathway to cultural participation. For many institutions, this connection is a rare opportunity for audience feedback.

We strengthened four Dublin cultural organisations by giving them the resources to engage a full time person in the area of fundraising and sponsorship. We provided two years of training and support with experts and peers, increasing the impact of their cultural organisations, expanding their own career opportunities, and generating learning with others by appointing them as mentors to local community organisations. Fundraising Fellowsing Dublin concluded at the end of 2018. The Department of Culture, Heritage and the Gaeltacht has decided to adopt the model created and support a national roll out of this programme in 2019 and onwards.

We assist the development of cultural ideas which support local communities and also have resonance internationally, by supporting the municipality in identifying areas of common activities and trends across Europe. Increasing participation in European funding programmes, preparing relevant cultural projects in response to calls for funding, and meeting the strategic objectives of the European Commission supports Dublin’s role as a global city of cultural influence.

We’re building a cultural map that brings together, in a single place, all existing cultural information available to the city of Dublin. It has two purposes:

THE MAP IS A SIGNPOST TO CULTURE, NOT A FINAL DESTINATION

Steady building of trust between the community and the artist and responding to learnings they've had along the way allows for deeper personal resonance and ownership by the communities.

“Dublin City Council’s Cultural Strategy 2016-2021 and its subsequent inclusion in the City Development Plan 2017-2022 signals our intent to deliver on the themes and ambitions as expressed by our citizens. Its implementation through Dublin’s Culture Connects signals the central role that Culture plays in the City Council and the daily lives of all who work, live in or visit Dublin”

Dublin City Council Culture Company is an active experiment in the Agenda 21 for Culture and UN 2030 Agenda's SDGs. The inclusion of culture as a core development objective for the first time across all actions of the Council's work denotes a subtle shift recognising its central role.

Dublin City Council Culture Company has put in place all the appropriate assessment and evidence gathering mechanisms to evaluate the programme, including the measurement of participation, geographic reach and project outputs; the capture of gender, age, community, social and civil data; the assessment of participant, artist, audience and partner organisation experiences and the extraction of action learnings to incorporate into ongoing projects in real time, allowing to continually realign approaches

A collaboration with the Department of Geography in the National University of Ireland, Maynooth is planned for this next stage of evaluation to set the methodology and indicators. We want to improve our impact research approach and learn from the experiences of European city peers in this regard. The learnings from the range and scope of the experiences gathered need to be assessed by the academic and international cultural community through Agenda 21 for Culture and UCLG. We believe the findings would demonstrate the tangible and intangible transformative nature of culture and its intrinsic value within the sustainable development of cities.

Sense of place and the project subject is the common thread which binds the experiences together. No cultural hierarchy is imposed, creative ideas develop only because they have relevance to the citizens and communities who participate.

Quality, personal creative journey. A cultural experiment formed in equal part by community, artist and place has ensured that a walk by the river will never be the same again.

Dublin City Council’s continuing support and belief in the achievements of the initial Dublin’s Culture Connects pilot, was confirmed through the establishment of the Dublin City Council Culture Company in March 2018, which will oversee the ongoing implementation of the Cultural Strategy and community driven cultural interventions and activities of the Council.

Financial continuity has been assured with a designated budget line within Dublin Council annually 2016-2019, for the culture company.

Dublin was a candidate for the third "UCLG Mexico City – Culture 21 International Award" (November 2017 – May 2018). The jury for the award drew up its final report in June of 2016, and requested that the Committee on Culture promote this project as one of the good practices to be implemented through Agenda 21 for culture. 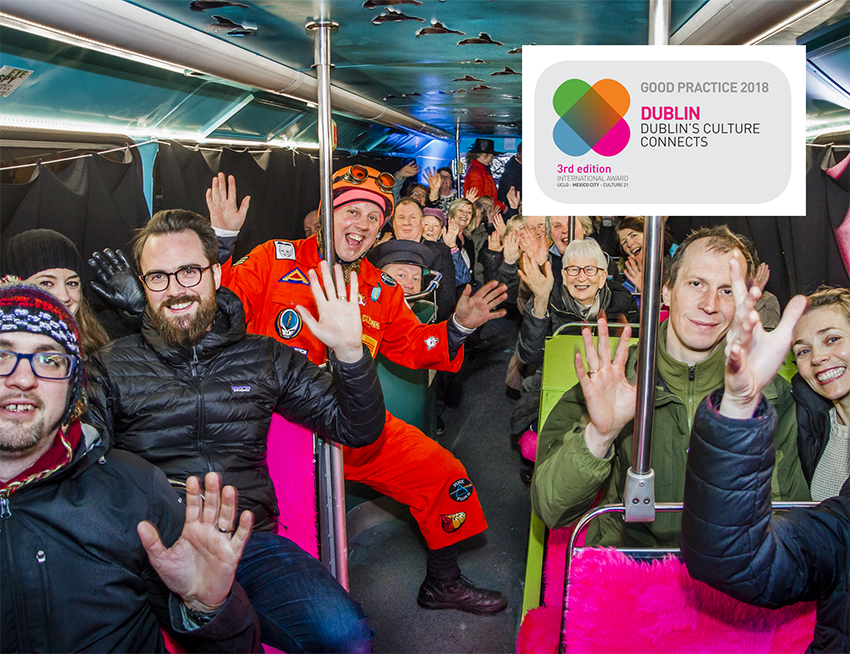